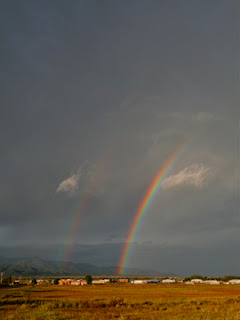 "What I really fear," he stated, "is that God will ask me why I wasn't more like Zusha."

That story shortened into a most intriguing question that might be asked of us as we exit this life:  Did you become yourself?  Contemplating that question now rather than later might help us live into our true self.


About the image:  There was a beautiful rainbow this morning ... not this one ... this one is in Taos ... but a lovely beginning to the morning nonetheless.
Posted by Joyce Wycoff at 8:59 AM