Love Letter to My Life #28: Something about picnic tables 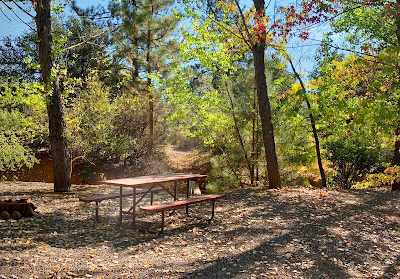 (We know the day we were born, but most of us do not know the day we will die. This love letter to my life is written on the day I've designated as my death day, the 17th of every month, and reminds me to be grateful for my incredible life.)
There is something about a picnic table. It’s not particularly comfortable, or lovely even in its cross-legged simplicity. However, the sight of a picnic table prompts a happy reaction in me. Maybe it’s the picnic table from childhood under the shady shelter of a large pecan tree; maybe it’s the symbol of years of camping trips and excursions; maybe it’s an ancient memory of eating in community out doors around a fire.
My reaction to picnic tables seems to be deeper than its form or function. Something happened yesterday that started me on this path of thinking about picnic tables and called to me at 3:30 this morning until I surrendered and began this letter.
I’ve been here in the hill country of east San Diego County for a week and a half, long enough to settle in and begin the familiar routines of writing, photography and making art. Yesterday, as the shade laced the yard, I spread my laptop and notebooks across the picnic table and settled in to think about a new project.
It was a perfect fall day: the air fresh and that perfect temperature that feels neither cool nor warm.. And, even though I’m in a rather large RV park (250 spaces), my neighbors were gone and the only sounds were a rustle of leaves and an occasional birdcall in the distance. I drifted into the project, writing, revising the related art work, mapping the project which slowly emerged like a developing photo in a dark room. When the day softened into evening and turned cool, I picked up my work and went back inside.
That's when I noticed the quiet. Not just the quiet of outside, but the silence in my head. I could hear, or rather feel, the silence, like being wrapped in a blanket of calm and peace. I thought it would go away when I noticed it, but it didn’t. It seemed to be in my body as well as my mind. It was part of  my breath.
In the past six weeks, I’ve been called to make this change, not understanding why. Every time I would have a doubt, it would be whisked away by the ease with which everything was happening. It was like walking through a maze of blind corners with no clue of which way to go until suddenly a “this way” sign would appear.
I still don’t know exactly why I’m here but it feels right and the peaceful silence is still with me even though it did wake me up in the middle of the night, demanding that I get up and write about this.
Posted by Joyce Wycoff at 5:00 AM 2 comments: 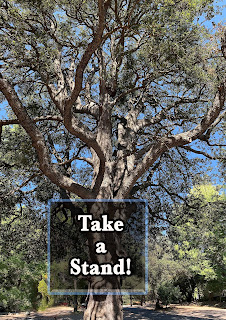 About five years ago, I felt a small shift in my being when I was honored to have a piece of art selected for the Bioneers, San Luis Obispo conference. My compensation was a complimentary registration which I appreciated as I thought it might be an interesting experience. I expected an academic meeting of environmentalists. What I experienced were amazing, uplifting stories about love ... love of our planet, love for every living being on our planet.

I wound up volunteering to be part of the organization which turned into a seed that continued to grow even after I moved away from the Central Coast.

Last year I attended the national Bioneers Conference last year and recently began to listen obsessively to their amazing podcasts, looking forward to the many different approaches to stories from the ..."revolution from the heart of nature."

This is such a delightful, inspiring podcast. About 30 minutes.

“It’s a sign of respect and connection to learn the name of someone else and a sign of disrespect to ignore it. And yet, the average American can name over a hundred corporate logos … and ten plants. Learning the names of plants and animals is a powerful act of support for them,” — Robin Wall Kimmerer
Precepts of the Honorable Harvest … it’s just good manners.
“Every breath that you take was made for you by plants.” — Robin Wall Kimmerer
Posted by Joyce Wycoff at 2:12 PM No comments: