Love Letters to my life #10: Talking with Warren Buffet


(We know the day we were born, but most of us do not know the day we will die. This love letter to my life is written on the day I've designated as my death day, the 17th of every month, and reminds me to be grateful for my incredible life.)

Of course, I wasn’t actually talking with Warren Buffet, however, in one of our weekly conversations, my wise friend Pat told me something that she heard him say on PBS.

Anyway, Warren was saying … imagine that as a young person you’re given a car and told that it is the only car you will ever own. There is no such thing as buying a new one or trading yours in for a different one. This is it. Your one and only car. Knowing that, how would you treat it? Perhaps you would take care of it, keep it clean, avoid accidents and change the oil regularly? Probably.

Of course, Warren (since we’re in conversation, I think it’s okay to use first names) was talking in metaphors, using a car to represent our bodies. I don’t know how far he took the metaphor, but I’ve been thinking about it since Pat mentioned it.

Pat and I talk often about our health and physical conditions. We’re both health-oriented and Fitbit buddies with a gentle competition going on with our daily steps. (Actually, I’m gentle; Pat’s a bit more fierce and is known to walk around her property until her numbers are ahead of mine.) We average about 70,000 steps a week which isn’t bad for two 70-ish women.

However, going back to Warren, we only get one car, but we don’t get to choose the one we want. It’s the luck of the draw. Some get Lamborghinis; some get Corvairs. This month, two men in our small village died suddenly, leaving gaping holes where they once walked. It left me wondering if they were “ready,” and what that might mean.

I know “being ready” is more than having wills written, arrangements made, and clutter distributed. As I pondered this question, I brought my friend Google into the conversation and he failed me utterly, offering only thoughts on suicide, signs of impending death, and some religious sites with their “make your peace now” messages.

The closest I came to decent advice was the statement attributed to Crazy Horse, “Today is a good day to die.” While that comment is probably apocryphal, it generally means, “I am ready for whatever comes.” Taking that to Google yielded mountains of face-your-fears-and-do-it-anyway advice, and more make-your-peace-now platitudes, leaving me still groping around in the dark.

I like the grand mysteries of life: What was there before the Big Bang banged? Does everyone have a soul mate? Why do some people like creamy peanut butter more than crunchy? I can argue most sides of an argument, but there is one thing I am certain of … one morning my car is not going to start.

Knowing that, what should I do? I could park my reliable, high-mileage Toyota and only use it for emergencies, but what fun would that be? I think it would be better to keep having adventures, exploring the world, changing the oil regularly, checking the brakes, and washing the bugs off the windshield.

The only answer I have to this particular question of how to be “ready” for what comes next is to keep doing what makes me feel alive and accept that “this, too, shall pass." Maybe it's only by living fully each moment that we are ready for that day when our particular car follows the pattern of Oliver Wendell Holmes' poem ...
Have you heard of the wonderful one-hoss shay,

That was built in such a logical way
It ran a hundred years to a day,
And then, of a sudden, it --

However, as for Warren, he’s now 88 and, as far as I know, his car is purring strongly.

(Dontcha hate metaphors that have gone on too long?)
Posted by Joyce Wycoff at 9:26 AM 5 comments: 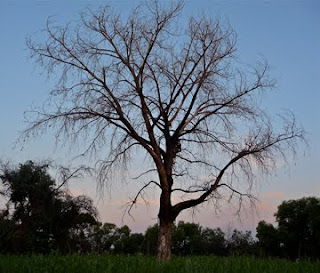 Update: this blog post from almost nine years ago reminds me of how much happens when we're not looking. Louise's post is now called Dare Boldly; Live Bravely and we're still blog buddies.

Missy has moved on to wherever the best friends in the world go when they're no long here. And, I'm in Mexico, light years away from the place where I was so lost.

Along the way, I have found pieces of myself and keep meeting that powerful stranger called Here.

In a few minutes, I will get on a bus and go to a placed called Morelia where I will meet other strangers and see what they have to say.

Louise at Recover Your Joy talks this morning about being lost in the woods and it reminds me of David Wagoner's powerful poem "Lost" from the book "Traveling Light: Collected and New Poems"  published by the University of Illinois Press in 1999.

A week ago I set off on my journey to pick up Missy.  It was a journey back to roots, to a place where I was lost.  And, as sometimes happens when one has lost their bearings, I had a mishap.  Fortunately a minor mishap that was put right by a mechanic's expertise, a transfer of dollars and insurance data.  Soon I was winding my way back to where the forest could find me again. I'm already starting to feel "found."

Stand still. The trees ahead and bushes beside you
Are not lost. Wherever you are is called Here,
And you must treat it as a powerful stranger,
Must ask permission to know it and be known.
The forest breathes. Listen. It answers,
I have made this place around you.
If you leave it, you may come back again, saying Here.
No two trees are the same to Raven.
No two branches are the same to Wren.
If what a tree or a bush does is lost on you,
You are surely lost. Stand still. The forest knows
Where you are. You must let it find you.