Procrastination is a fraud word, an idea wrapped in false colors. It starts out with a positive prefix … “pro” meaning “for” or “forward” as if we’re making progress or proceeding or producing. That profound prefix is then glued to the Latin word crastinus meaning “of tomorrow” creating a word that basically means moving forward … tomorrow, or basically, not doing today what you could … or might … do tomorrow.

Over time, this word became an enemy to success, happiness and feelings of self-worth. Wearing the procrastinator label was akin to wearing a scarlet A, something to be scorned in polite company, and especially on the path to success. Even worse, it became a volcano of negative self-talk … I’m lazy, irresponsible, a slacker, a dawdler, a dilly-dallier, an idler, lagger, loafer, slowpoke, or straggler. I will never be a … (fill in the blank).

Yesterday, an unsourced sketch showed up on my Facebook page. It was strikingly simple, worthy only of a glance … until it started to dawn on me how powerful it was. The iceberg metaphor holds true for so many things … perhaps even for everything. What we see is never all there is. 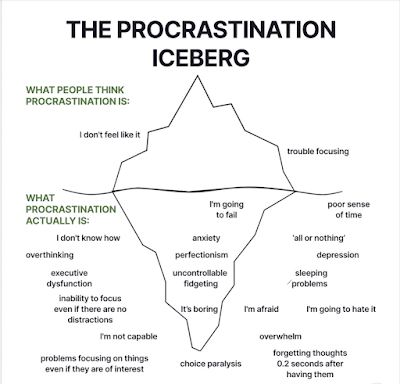 Because procrastination is such a rich source of negative self-talk, it’s worth exploring. It helps to think of all the things you could be doing as two buckets of potential procrastination:

First, there’s the outside bucket of all the stuff the world wants you to do … from getting a job, getting married, raising a family, to brushing your teeth, bathing regularly, and balancing your checkbook.

Then, there’s the interior bucket of everything that’s important to you … from hugging your children or reading a just-released novel by your favorite author to walking through a forest or marketing your latest creative work.

It’s important to understand the repercussions of procrastination for both buckets. Procrastinating regarding the outside bucket triggers a response from others … from mild disappointment to outrage depending on what they expected of you. The repercussions of procrastination on the interior bucket stuff can range from a momentary oops feeling to a creeping, soul-rotting feeling of having broken trust with yourself and feeling worthless.

The Gift of Procrastination

As I have walked deeper into the practice of gratitude, I keep coming back to David Steindl-Rast’s statement: Everything is a gift. That’s a mighty big everything.

How is procrastination a gift? It is a reminder that we have things to do … things the world wants us to do and things we want us to do. The world is a big, open door to mysteries to explore, problems to be solved, beauty to be stunned by, people to love, places to go. One lifetime is not enough to do it all, so we have to choose.

In order to procrastinate, there has to be something to be done, whether it comes from the world bucket or the me bucket; whether it is critically important or an arrange-the-spices task. So, we create To Dos, tasks we’ve accepted from the world and tasks we’ve set as our own priorities. Then the question becomes: Why don’t we do them?

And then along comes an iceberg graphic that basically states: it’s all about what we can’t see … what we feel and what emotions are triggered by the task and the expectations around it. The Facebook graphic started me wondering and wandering through Google where I found deprocrastination.co, apparently an unknown entity sitting in a cave downloading wisdom from the Universe such as the following:

= a short-term escape from stress

associated with a task or a decision.

Procrastination is not the problem.

It's a tactic we use to make ourselves feel better.

It’s a symptom of temporary or deeper psychological issues.

Well, that puts a different spin on it. I decide to test it on a current procrastination in my Me Bucket: marketing Gratitude Mojo.

Recently Lynne Snead and I completed the creation of this 26-week, workbook/journal based on advanced gratitude practice tools. We have been using it as we developed it for almost a year and a few of our friends have joined the journey. All of us are convinced it is changing our lives, so it’s now time to take it out into the world. But I am procrastinating, claiming the need for more research, putting other tasks at the top of the to do list, talking about doing but not doing.

If I go back to the graphic above, I own at least the following:

It makes me laugh … almost. I’ve been studying success for decades. I know that everyone goes through this and that the people who succeed are the ones who push through all this fog of doubts and all the dithering. So, rather than sitting here writing this long exposition about procrastination, I should recognize that what I am doing is procrastinating, not sending the letter I’ve already written (and rewritten a dozen times), not walking across the hot coals to get to the other side.

I know that this procrastination is actually producing the outcome I least want: failure. STOP. Maybe that’s not true; maybe there’s something even below that least wanted outcome: the fear of being rejected. As long as I procrastinate, I am safe. Procrastination is like a giant, bullet-proof shield I can hide behind.

Okay, I just pressed send to the letter and to a tweet. My expectations are nil but I have faced the dragon and sent the letter. We'll see what happens.