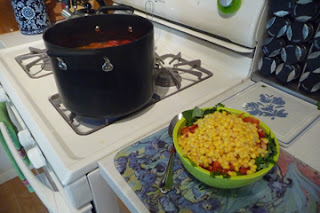 Right now the foothills are confused.  With green grass sprouting and leaves falling it doesn't know whether it's spring or fall.  But, there is just enough crispness in the air, that, at least for today, I'm going with fall and making the first pot of soup for the season.  I love the color and smells and abundance of a big pot of soup.  Enough for today; enough for tomorrow; enough to freeze for chilly days when I don't feel like cooking or share with a neighbor.

Something to keep in mind:  our forefathers did without sugar until the 13th century, without coal fires until the 14th, without buttered bread until the 16th, without tea or soup until the 17th, without gas, matches or electricity until the 20th.  (From thinkexist.com, soup quotes)
Posted by Joyce Wycoff at 10:03 AM