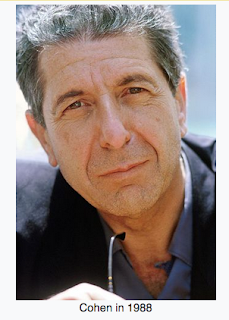 Day 4: Democracy Is Coming to the USA

We need this song ... may it go from Leonard's heart to God's ears.

Cohen was a Canadian singer, songwriter, poet, and novelist. He had received positive attention from critics as a poet and novelist but had maintained a keen interest in music, having played guitar in a country and western band called the Buckskin Boys as a teenager.

In 1966, Cohen set out for Nashville, where he hoped to become a country songwriter, but instead got caught up in New York City's folk scene. His first album was classified as contemporary folk. (Wikipedia)

Lyrics are shown below.

It's coming through a hole in the air
From those nights in Tiananmen Square
It's coming from the feel
That this ain't exactly real
Or it's real, but it ain't exactly there
From the wars against disorder
From the sirens night and day
From the fires of the homeless
From the ashes of the gay
Democracy is coming to the USA