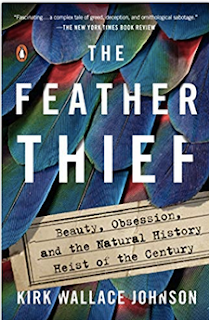 Amazon: As heard on NPR's This American Life

“Absorbing . . . Though it's non-fiction, The Feather Thief contains many of the elements of a classic thriller.” —Maureen Corrigan, NPR’s Fresh Air

“One of the most peculiar and memorable true-crime books ever.” —Christian Science Monitor

A rollicking true-crime adventure and a captivating journey into an underground world of fanatical fly-tiers and plume peddlers, for readers of The Stranger in the Woods, The Lost City of Z, and The Orchid Thief.
On a cool June evening in 2009, after performing a concert at London's Royal Academy of Music, twenty-year-old American flautist Edwin Rist boarded a train for a suburban outpost of the British Museum of Natural History. Home to one of the largest ornithological collections in the world, the Tring museum was full of rare bird specimens whose gorgeous feathers were worth staggering amounts of money to the men who shared Edwin's obsession: the Victorian art of salmon fly-tying. Once inside the museum, the champion fly-tier grabbed hundreds of bird skins—some collected 150 years earlier by a contemporary of Darwin's, Alfred Russel Wallace, who'd risked everything to gather them—and escaped into the darkness.
Two years later, Kirk Wallace Johnson was waist high in a river in northern New Mexico when his fly-fishing guide told him about the heist. He was soon consumed by the strange case of the feather thief. What would possess a person to steal dead birds? Had Edwin paid the price for his crime? What became of the missing skins? In his search for answers, Johnson was catapulted into a years-long, worldwide investigation. The gripping story of a bizarre and shocking crime, and one man's relentless pursuit of justice, The Feather Thief is also a fascinating exploration of obsession, and man's destructive instinct to harvest the beauty of nature.

JW: This is a book about obsession and beauty.  It is a unique story that opens up worlds I wasn't aware of and is told by a master storyteller. I not only fell in love with the book; I became a fan of the author who is a deeply troubled person, plagued by PTSD from Iraq and committed to rescuing the Iraqi translators whom we left behind when the war ended. He becomes the obsessed chasing the obsessed and writes a powerful story that I will long remember. The opening quote captures it perfectly:

From book: "Before the Hermès bag or Louboutin heel, the ultimate status indicator was a dead bird." (43)

"a shawl made from eight thousand hummingbird skins." (45)

"With demand for birds like Herons and Ostriches far outpacing supply, entrepreneurs around the world set up feather farms. Since Herons weren't redisposed to life in a cage, farmers blinded the birds to make them more docile, running a fine filament of cotton thread through the bird's lower eyelid and tugging it over its upper eyelid." (46)

For a better idea of the birds that were decimated by the feather craze prior to laws preventing the collection and exportation of rare bird feathers, watch this video: 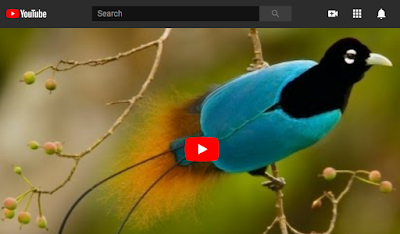 flybirder
5.0 out of 5 starsA sad but brilliant commentary on the greed of men
August 9, 2018
Format: Kindle EditionVerified Purchase
I read this well written book with tears. Being both an avid fly Fisher and birder, I found this book to be a timely epiteth to all those species that are vanishing before our eyes. The few who care and look upon these species with wonder are also vanishing. Soon, this earth will be decimated of its beauty. It is so difficult to go birding now and enjoy it as I once did because every bird I see now I realize will soon be gone. As for Kirk and his valiant efforts, thank you for shedding light on this weird, fanatical, useless hobby that has raped the world's jungles and forests all to glue shit on a hook to hang on a den wall. I just feel boiling anger after reading about this. Sad.

Katherine Y
VINE VOICE
5.0 out of 5 starsTrue crime book that reads like a mystery novel
July 19, 2018
Format: HardcoverVerified Purchase
This is a startling true story about the lengths a man will go to satisfy an obsession. The reader is introduced to the world of fly-tieing, the art of creating intricate fishing lures from bird feathers. What is remarkable about this activity is there is a subset of these tiers who collect extremely rare and valuable bird feathers and pay exorbitant prices for the most exotic ones. The subject of this book is such an individual. Edwin Rist is an accomplished student musician and avid fly-tier who steals hundreds of rare birds from the British Museum in 2009.

The book is a study in obsession as the author himself, an Iraqi war veteran, becomes fixated on the crime and the man who committed it. The story is immersive. Johnson, the author, has spent an incalculable amount of time researching the history of fly-tieing and the lure of exotic feathers to the point of even surreptitiously attending a fly-tiers convention undercover. He becomes a principal investigator in solving the details of Edwin's crime, identifying accomplices and tracking bird skins.

The book grabbed my interest from the first few pages. Johnson's book has all the pacing of a well-crafted mystery novel and manages to hold the suspense of exactly what happened and who was involved throughout the entire book. He covers this story with all the zeal of a professional investigative journalist. I would recommend this book to anyone who likes psychological character studies and true crime.
Naslund fan
3.0 out of 5 starsHalf a book would have been a blockbuster
May 1, 2018
Format: Kindle EditionVerified Purchase
I loved the crazy nature of the crime and the way it was reported, including the background about the small group of fly-tiers, most of whom don't even fish, whose obsession provided the raison-d'être for a very bizarre crime. The crime was wrapped up about half-way through the book, so I wondered what the rest would entail. It turns out that the author spent time, energy and money on the un-asked-for pursuit of the birds that had not been accounted for by the authorities or by the museum from which they were stolen, both of whom assumed that most had been dismembered and sold as "parts." This mission has its moments, as the thief himself is interviewed at length, but, overall, this section is less satisfying. I'd give the first half of the book five stars, but the second half just two. IMPORTANT: When reading this book on the Kindle its not clear that there are many plates and illustrations at the end of the book showing the birds and the flies, along with pictures of the principals.