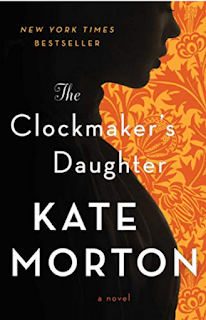 A rich, spellbinding new novel from the author of The Lake House--the story of a love affair and a mysterious murder that cast their shadows across generations, set in England from the 1860s until the present day.

My real name, no one remembers.
The truth about that summer, no one else knows.

In the summer of 1862, a group of young artists led by the passionate and talented Edward Radcliffe descends upon Birchwood Manor on the banks of the Upper Thames. Their plan: to spend a secluded summer month in a haze of inspiration and creativity. But by the time their stay is over, one woman has been shot dead while another has disappeared; a priceless heirloom is missing; and Edward Radcliffe's life is in ruins.

Over one hundred and fifty years later, Elodie Winslow, a young archivist in London, uncovers a leather satchel containing two seemingly unrelated items: a sepia photograph of an arresting-looking woman in Victorian clothing, and an artist's sketchbook containing the drawing of a twin-gabled house on the bend of a river.

Why does Birchwood Manor feel so familiar to Elodie? And who is the beautiful woman in the photograph? Will she ever give up her secrets?

Told by multiple voices across time, The Clockmaker's Daughter is a story of murder, mystery, and thievery, of art, love and loss. And flowing through its pages like a river, is the voice of a woman who stands outside time, whose name has been forgotten by history, but who has watched it all unfold: Birdie Bell, the clockmaker's daughter.

JW: Disturbing book but compelling. Kaleidoscopic. "The Art of Belonging" manifesto by Edward Radcliffe about the connection between human beings and places; places and art. "The land does not forget. Place is a doorway through which one steps across time." Do we find our belonging in a place? Do we belong to a place.

Although Lily Millington, the titular character of this novel, is a smart and compassionate ghost, she's unreliable: Was she the victim or the perpetrator of a murder that happened one night in 1862 at Birchfield Manor? To escape stuffy London for the summer, Lily and her lover, acclaimed artist Edward Radcliffe, and assorted bohemian youth went to Edward's house in the country. Then his proper Victorian fiancée showed up-and someone died. Another guest was Lucy, Edward's beloved little sister, 13 at the time. A conventional murder mystery might have ended there, with readers believing Lily, but tough, sympathetic Lucy must carry on this epic that spans generations, eras, and wars. Her famous brother, Radcliffe, unable to recover from the tragedy, has disappeared. She grows up, eventually inheriting Birchfield, which, she learns, is over 400 years old, and reinvents it as a school for young girls. That's where readers meet Ada, yet another impressive character, whose accidental proximity to a death repeats the pattern. Whodunit fans will gobble up this work, trying to solve the multiple mysteries. This best-selling Australian author's absorbing saga of family, love, and history has much to offer eager readers. VERDICT A must-have for all collections.-Georgia Christgau, Middle College High School, Long Island City, NYα(c) Copyright 2011. Library Journals LLC, a wholly owned subsidiary of Media Source, Inc. No redistribution permitted.


Ever since I read The Lake House, which I loved, I have been meaning to read another one of Kate Morton's books. The Clockmaker's Daughter, her latest book, does not disappoint. It's told primarily from the viewpoint of Elodie, a woman in the present day who discovers a leather satchel containing a mysterious photograph and sketchbook, and from a group of artists in the mid-1800s, who were spending a summer at Birchwood Manor, an English countryside house with a long history. There are other characters from different points in time that weigh in as well, helping to build the narrative.

Morton is especially skilled at building these types of historical stories, that are part mysteries, part historical fiction,and part love story. The pacing is almost perfect - just enough information is given that the story keeps on building and the reader is engaged, but nothing is ever revealed too early or too quickly. In fact, I didn't realize what would happen at the end of the book until the precise moment when Morton hinted at it in the last pages. Additionally, the setting is wonderful, and I could really feel myself at the Manor both in historical times and in the present day. There are little historical details woven throughout the book that really help build the setting. Furthermore, the character development is fantastic - I really felt like I knew Elodie, the artists, and others.


I love Kate Morton's previous novels and didn't want them to end. So when this one came out, I began reading it as soon as I could. But I am not enjoying it like I should, like I did the others. I am so lost and so disappointed. I get who Elodie is and her set of characters, and Edward and most of his set of characters, but who the heck is Leonard and Jack? And somebody new I ran into last night, they just sort of appear out of nowhere and I don't know who, where or when they are. I need somebody who understands this book, if there is someone like that, or the author herself nearby to answer my questions! Maybe I just need to start over and take notes, if that will help, or just give up. Maybe a reader's guide to each chapter. Gosh, reading one of my favorite authors shouldn't be this hard!
Posted by Joyce Wycoff at 6:24 AM