If the Bioneers folks intended to have the first day of the 30th annual Bioneers Conference grab us by the heart, they succeeded. The beloved founders Kenny Ausubel and Nina Simons were greeted with a standing ovation before they even opened their mouths. And when Nina told us of the recent departure of her mother, the tears began, hers and ours.

Tears continued as Terry Tempest Williams approached the podium after Nina and, obviously affected said, “I don’t know how to speak.” After a pause, she said, “Maybe we should just hold the silence and weep together.”

And we did, until she began to tell us about Castleton Rock where scientists recorded its vibrations which pulsates at about the same rate as a human heartbeat.

Terry played a recording of Castleton Tower to a pin-drop silent audience."The earth has a pulse,” she said.

“It is alive.” And we knew it was true because we had just heard it. (You, too, can hear it here.) Then she went on to read from her powerful new book, Erosion, Essays of Undoing. I was delighted to have her sign my book and let me take a picture of her and her husband Brooke holding up a poster highlighting her reading: "Boom! Erosion of Belief.”


My favorite quote: "I refused to perpetuate this lie, this myth,
this abuse called silence.
If birds had a voice, so did I." 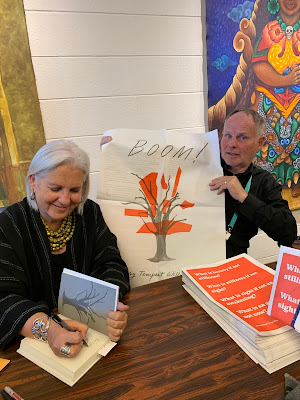 Eve Ensler of The Vagina Monologues fame prompted more tears as she told the story from her new book The Apology about what she wanted, but never received, from her father who sexually and physically abused her for years. She wrote the apology she wanted from him and advocated it as a way to finally reach forgiveness. Then she spoke her own apology to the earth and we all wept again.

Jerry Tello, co-founder of the Healing Generations Institute, made us fall in love with his abuela (grandmother). Jerry grew up on the rough streets of Compton but says that his abuela telling him every day, “You are a blessing, just the way you are,” inoculated him from the wounds of that rough world. “When people are related to you, you treat them different,” he said as he greeted us all as relatives and invited us to do the same with others.

David Orr, Professor Emeritus of Environmental Studies and Politics at Oberlin College and author of Dangerous Years: Climate Change and the Long Emergency, warned us that we are experiencing the most dangerous challenge to free government that any of us have experienced. He explained that democracy seldom fails due to outside forces but normally commits suicide as inequality and despair become the norm in a society and lead to oligarchy where money and power wind up in a few hands. 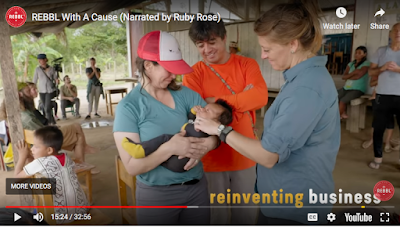 In the evening, four environmentally focused films were shown. My favorite was REBBL with a Cause, the story of how a company is fighting human trafficking by helping communities build a sustainable income source through a healthy product. I didn’t realize that "Human trafficking is the fastest growing illegal industry of our time with 45.8 million people currently being exploited worldwide.” This is an inspiring and uplifting story of what a company can do when it focuses on people over profit and who knew that Brazil nuts grow in a ball?


Throughout the day, music and poetry weave through the often intense presentations and the repeated reverence shown to the land and the cultures of the indigenous peoples create a sense of sacred not often found at conferences.
Posted by Joyce Wycoff at 10:33 PM