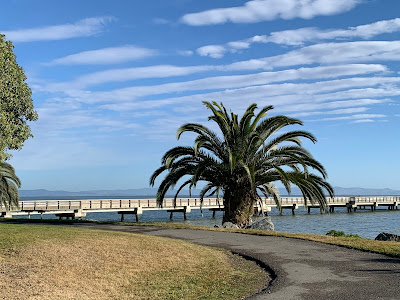 Blue sky and the bay welcomed us to McNears Park (San Rafael) as we formed a large circle and three indigenous cultural leaders prayed and sang for the day to come. One Hopi leader from a desert farming community was overwhelmed by the abundance of water.

The first day of Bioneers is always an offering on Traditional Ecological Knowledge (TEK). This year focused on baby baskets and the gathering of materials to make them.The baskets are not just something to transport the baby in, as I had thought, but a central part of the culture. I was amazed at how much respect it shows the baby, surrounding her or him with natural materials to smell, touch, and chew on as well as giving them a sense of safety, security, and belonging. 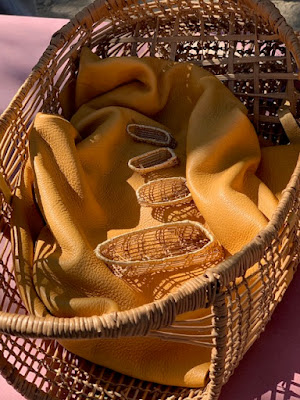 One of the most touching stories I heard was about a basket project for children who have been fostered out of the culture. Women make baskets for a specific child and accompany it with his tribal history. The baskets are stored and offer a re-entry point, so that when the adult is ready, s/he can come home. The baskets tell them, "These are your roots.”

One basket weaver showed us her daughter’s baby basket (they takeabout a year to make) and told us how she “became a mom,” which was not the normal story of impregnation and hospital trauma.

In her culture, the new mother stays in a special place for 10 days with her baby, while the women of the tribe take care of her and the baby and give them time to bond. Her story made me think about what my own teenage mother went through as she was already divorced, under-educated, and forced to ask her father to pay her hospital bill. Life created a situation where we never bonded properly, leaving both of us wanting something neither of us knew how to find.

Lunch was a Native American offering ... not only delicious, but a special treat for me since I didn’t have to worry about garlic.( I had emailed the chef in advance.)  The squash-apple-ginger soup was incredible (and simple enough for me to make (I think) and the hit of the day were the blue corn huckleberry cookies.

There was a lot of discussion about what the tribes are doing to revitalize their customs and reclaim their culture and their roots. And, there is obviously great pain about what they have lost and how badly they have been treated. One leader called herself "extinct."

It makes me also wonder about the pain of never knowing those deep roots ... not knowing what we lost. All of us at one point were indigenous, native to and connected to a land. Somewhere in the deep past of time, we left the world of hunter-gathers, became farmers, became industrialized, became immigrants to a new land or lands, leaving behind language, ceremonies, and knowledge. Because all of that is buried so deeply in our past, we can't even name the ache. However, maybe it is a part of our call to consumption as well as the soul sickness that shows up as depression, greed, hatred, violence.


Later, the day became even more special when I found two incredible trees on the grounds of the Convent across from Dominican University. Here's one of them ... they were huge! 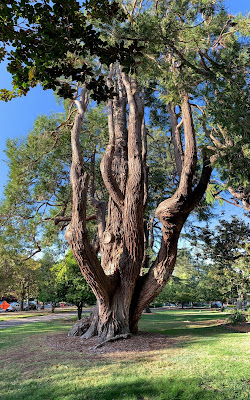