Leonard Cohen 30-Day Tribute ... Day 1: Thanks for the Dance

Day 1: Thanks for the Dance

This morning a friend told me about an NPR interview with Leonard Cohen's son talking about the posthumous album that has just been released. In the interview, Adam Cohen said something that helped me understand why Leonard Cohen has always touched so many of us so deeply: "He (Leonard Cohen) invites you into your own inner life because he takes the inner life seriously."

Listening to the NPR interview made me want to reconnect, not only with the new work but with his entire body of work, so I will be posting a 30-day tribute to say thank you to this musical genius.

Sometimes a man dies but his words, his poetry … his spirit … lives on and gives birth to something new in the world. Leonard Cohen is one of those spirits who will gift us for years to come.

His last album, “Thanks for the Dance” is the result of a lot of people collaborating for  three years after his death to extend the magic, the music, the legacy of a unique human being. Thanks to everyone for this gift.

Rolling Stone calls the new album a “posthumous grace note … a work as alive, challenging, and essential as anything issued in the artist’s lifetime."

This video shares the beautiful love story of the creation of this new album: 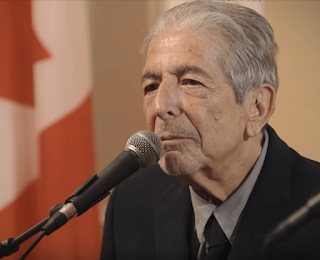 Also listen to: NPR’s Terry Gross interview with Adam Cohen about the last book and last album of his father.
Posted by Joyce Wycoff at 5:00 AM

Labels: Leonard Cohen, Thanks for the Dance