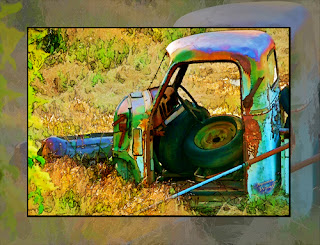 Last night I spent several delightful hours working on my photographs, titling, keywording, organizing.  It's one of my favorite activities and almost always inspires a new piece of work.  Earlier this summer I had photographed a rusted hull of a truck in a weedy field.  It's a common picture, probably falls in the cliche category.  I passed it by but it kept calling me back so I went back and decided to play with it, turning it into a colorful, "painterly" image.  Another cliche since it's been done often ... and yet, it really pleased me and evoked a nostalgic feeling so I decided to keep it.

Today I started thinking more about cliches and went to Wikipedia which states:

A cliché or cliche (pronounced UK: /ˈkliːʃeɪ/, US: /klɪˈʃeɪ/) is an expression, idea, or element of an artistic work which has been overused to the point of losing its original meaning or effect, rendering it a stereotype, especially when at some earlier time it was considered meaningful or novel.

There's no doubt that over-colored old cars and trucks have been done a lot and could probably now be considered a stereotype or cliche.  However, the image called to me and if I had refused to do it just because I knew it had already been done, wouldn't that have been putting other people's judgments ahead of my own yearning to explore this particular image?  It makes me think that what we call cliches may really be OP cliches ... other people's cliches.  Even though I know old trucks have been done a lot, there was something about this image that called to me so it was still "meaningful or novel" for me.

Part of this creativity cleanse is learning to listen to my own spirit and how it wants to be expressed.  Not painting something I want to paint because I think it is a "cliche," could shut down my creative process.  So I proceeded to play with this image, which I call "Yesterday's Dream," even framing it and adding it to my gallery.  By honoring it, I honor my own process and I leave OP cliches and judgment to the world.
Posted by Joyce Wycoff at 3:14 PM