This year began in failure.  I decided to enter the "Top Self-Help Book Contest" and did so with a certain degree of arrogance.  I'm a published author with two "classic best-seller" books (books that sell 100,000 copies over a period of years) so I thought I'd make it into the final rounds at least.  Ahhh, ego ... I didn't make it past round 1.
In my still-arrogant state, I went through the 300 or so authors and decided which ones should make it to the finals ... sort of like watching American Idol preliminaries.  One person I picked to be one of the finalists was the artist Joan Marie.  I contacted her and met probably the most enthusiastic woman walking the planet.  She is an amazing artist, has a great story and is positively contagious in her joyful enthusiasm.  I was disappointed when I didn't make it to round 2 but absolutely stunned when Joan Marie didn't make it. 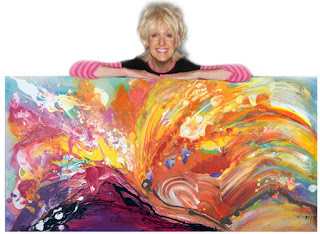 But, we connected and have stayed in touch.  Today on her Facebook page she asked an interesting question:  What would YOU WEAR or BRING to YOUR photo shoot to have FUN!?


It's a challenging question for me because I NEVER think having my picture taken is fun.  It probably started in grade school when my mother insisted on giving me a permanent just before photo day.   The result  took my tendency toward friz into an otherworldly state.  That combined with the sensitivity of my eyes which made me cry under the bright lights left a trail of truly horrible school pictures. 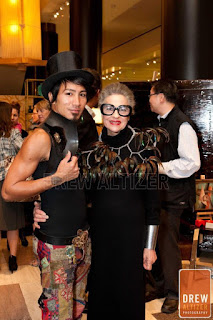 But, I've been thinking about having a "real" picture taken and wonder what it would take to make it fun.  Last night at the gallery opening, there was a musician who looked like a cross between Santa Claus and Johnny Cash.  He was playing gospel/western songs and absolutely looked "the part" ... and was obviously having fun.  A couple of months ago I wrote about the artist Kue King who is himself a work of art ... and having fun with his "costumes." (pictured right)
I'm obviously attracted to people who have the flair to express themselves through their physical appearance.  Is this part of the Creativity Cleanse ... gathering the courage to find my own unique expressiveness?  Just the thought of it has the push/pull, excitement/fear of thinking about bungee jumping or walking a tight rope between tall buildings.

Food for thought.
Posted by Joyce Wycoff at 11:13 AM