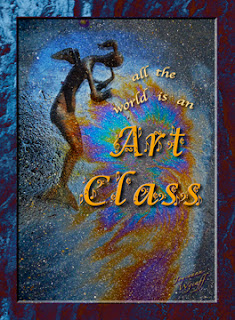 Yesterday was day 2 of the Creativity Cleanse and a remarkable thing occurred.  I uncovered a barrier that I never would have believed I was carrying.  It's one of those things that, if a friend had expressed this belief, I would have worked hard to help her see the error of it.

But, there it was, like a small boulder attached to my ankle and I had gotten so accustomed to it, I wasn't even aware of it.  And, yet, it alters every step I take, slows me down, makes me tired, keeps me from making leaps.

I don't know if it's the Creativity Cleanse or the continued lifting of the fog of trauma, but suddenly I realized I've been living my life as if it were over! Not over in the sense of death but over in the sense of meaning and importance ... nothing left to do, nothing left to contribute, not enough time to start big, important projects, not enough energy to climb tall mountains.

I've been hunkering down, trying to live cheap, contracting, cutting away, making do.  This isn't quite as dire as it sounds, of course ... I've been making art and tiptoeing into the life of an artist.  But, I've been doing it as a pass-time, self-soothing activity, assuming it has no real meaning, relevance, or importance to the world.

Yesterday it hit me:  it's not over!  I'm not over.  I don't really know where I'm going but right now, right here I'm committing to live exhuberantly with passion and meaning.  Monday evening I saw a sunset afterglow that was more brilliant than anything I've ever seen before.  It felt like passion had been sprayed across the world and into my being.  The job I hereby accept is to follow it and see where it takes me.