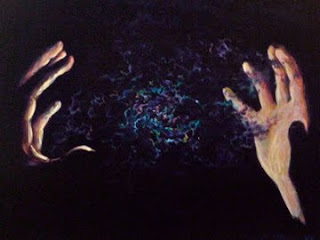 "The most beautiful and profound emotion we can experience is the sensation of the mystical. It is the power of all true science."
-- Albert Einstein

My friend Emily Meek is an amazing painter of archetypal scenes. She was kind enough to give me a print of one of my favorites, and, since she is also a poet, on the back she wrote:

The Tension of the Opposites

Both in Shadow.
Both part Light.

(Neither one's all wrong or right.)

Only curious delight
to watch,
as Two call forth the New Light.
It strikes me that almost all of our social polarities would benefit from this thinking that neither side is all right or all wrong and if we could look at the whole situation with curious delight, we might call forth a new light. What if we decided to hold our most diametrically opposed views in that state of tension and let curious delight work its magic in finding a Third Choice which would shine new light on the situation? Wouldn't it be great if we could apply this thinking to the issues of abortion, health care, gay marriage, immigration and world conflicts?

But, this morning I'm thinking of the long-standing division between Darwinism and Creationism. I have just finished reading Bruce Lipton's visionary book, The Biology of Belief, in which he makes a case that Darwinism is not exactly right ... but neither is Creationism. Somehow, through his curious delight as a cellular biologist, he managed to find a new light and has become a leading thinker in the new field of biology termed epigenetics, which literally means "control above the genes."

Suddenly I realized that a cell's life is controlled by the physical and energetic environment and not by its genes. Genes are simply molecular blueprints used in the construction of cells, tissues, and organs. The environment serves as a "contractor" who reads and engages those genetic blueprints and is ultimately responsible for the character or a cell's life. It is a single cell's "awareness" of the environment, not its genes, that sets into motion the mechanisms of life.

Lipton's scientific discoveries in cellular biology shattered his beliefs about the nature of life to the point that he "instantly went from nonbeliever to believer ... convinced that we are immortal, spiritual beings who exist separately from our bodies. We are made in the image of God and we need to put Spirit back into the equation when we want to improve our physical and our mental health."

The science developed 300 years ago has served us well in many respects but it also filled us with thoughts and beliefs that may no longer be serving us well in today's challenged, over-populated, over-consuming world. Lipton offers us fresh, empowering insights based on sound science. What a nice way to start the new year.
Posted by Joyce Wycoff at 8:14 AM