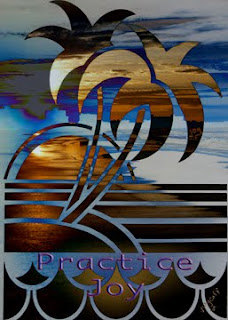 "You have to know what you want to get. But when you know that, let it take you. And if it seems to take you off the track, don't hold back, because perhaps that is instinctively where you want to be. And if you hold back and try to be always where you have been before, you will go dry." -- Gertrude Stein

Several months ago the theme song from Bagdad Cafe (I am calling you ... ) began haunting me as I listened to it repeatedly. A friend asked me what I was calling and I had to reply that I didn't know. Weeks later now, I know ... I'm calling my new life. At the end of November, I made a declaration of independence and challenged myself to fearlessly enter the unknown ... Dragon Country. And, for several months now I've been taking a deep dive into "new science" ... quantum physics, cellular biology, etc. As a non-scientist, this has been pretty heavy slogging but I've been fascinated to find the extent that science is now validating what the ancient mystics have been saying for hundreds ... thousands ... of years.

So with those beliefs settling into the fiber of my being and with the challenge to enter the unknown territory, I have created my intention for 2010 and am making it public. I recently heard a quote that stated, "Someone out there needs you. Live your life so they can find you." I want my new intention to live in the world. I have no idea how to make it a reality so it will have to attract the right people and situations to me.

I am committed to, by December 31, 2010, living in California in a beautiful, peaceful place with lovely outdoor living space. From my new home I can see the ocean and there are incredible, big trees around me. I have a perfect place to do art, play music, meditate and exercise. I am actively involved with helping people create their own spiritual realities and all of us are part of the change in consciousness, the tipping point, that will eradicate violence and restore the planet to health. By my side in this joyous venture is my new playmate, lover, best friend and spiritual partner.

Many, if not most, of you will read the above and think, "She's crazy!" And, that's perfectly OK. For any of you who are attracted to this, leave me a comment with your email. I'll be happy to talk, even if it's just how this intention is progressing. I'll also put brief updates here every month.

AND, if you'd like to go public with your 2010 Intention, feel free to put it in the comments section.

* I'd like to clarify this ... I do NOT believe that people with an illness or other life challenge have been "bad" or ineffective in creating their own realities. Stephen Hawking has a neuro-muscular dystrophy that is related to amyotrophic lateral sclerosis (ALS), a condition that has progressed over the years and has left him almost completely paralyzed. Yet he is one of the most pre-eminent scientists of our time, even awarded in 2009 the Presidential Medal of Freedom, the highest civilian award in the United States. Things can happen to us ...what we do with them is our choice and one way that we create our reality.

About the Image: This is one of my new series of "intention art."
Posted by Joyce Wycoff at 2:04 PM