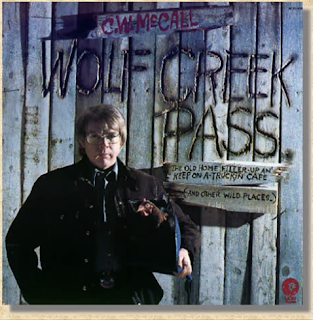 It seems only fitting that we should end this poetic adventure with a bit of humor from CW McCall ... only problem there isn't any CW McCall ... he was the invention of an advertising guy named William Dale Fries, Jr., who, theoretically, still lives somewhere in Iowa. Fries wrote the lyrics and sang while Chip Davis, later of Mannheim Steamroller, wrote the music.

Back when the girls were young, we drove from California to Missouri to visit my parents. To entertain us along the way, I made a mix tape (long before playlists) of story songs, some funny, some sad, some just down right silly. This one was a favorite especially since we drove over the real Wolf Creek Pass.

Somewhere along the line I memorized it and I love it when a conversation opens up and I can say with a sorta straight face ...


did I ever tell you about the time that me and Earl
was haulin' chickens on a flatbed out of Wiggins ...

It's a fun song ... hope you enjoy it ... and hope we're all around next year when Poetry Month rolls around again. And thank you Mr. Fries ... or CW ... your music has given us a lot of fun.

[Verse 2]
We was sittin' there suckin' toothpicks
Drinkin' Nehis and onion soup mix
And I says, "Earl, let's mail a card to mother
And then send them chickens on down the other side
Yeah, let's give 'em a ride"

[Verse 3]
Well, Earl put down his bottle
Mashed his foot down on the throttle
And then a couple of boobs with a thousand cubes
In a 1948 Peterbilt screamed to life
We woke up the chickens


[Verse 4]
We roared up off of that shoulder
Spraying pine cones, rocks, and boulders
And put four hundred head of them Rhode Island Reds
And a couple of burnt-out roosters on the line
Look out below 'cause here we go

[Verse 5]
Well, we commenced to truckin'
And them hens commenced to cluckin'
And Earl took out a match and scratched his pants
And lit up the unused half of a dollar cigar and took a puff
Says, "My, ain't this pretty up here"

[Verse 6]
I says, "Earl, this hill can spill us
You better slow down, you gon' kill us
Just make one mistake and it's the pearly gates
For them 85 crates of USDA-approved cluckers
You wanna hit second?"

[Verse 7]
Well, Earl grabbed on the shifter
And he stabbed 'er into fifth gear
And then the chromium-plated
Fully-illuminated genuine accessory shift knob
Come right off in his hand
I says, "You wanna screw that thing back on, Earl?"

[Verse 8]
He was tryin' to thread it on there
When the fire fell off of his cigar
And dropped on down, sorta rolled around
And then lit the cuff of Earl's pants
And burned a hole in his sock
Yeah, sorta set him right on fire

[Verse 9]
I looked on out of the window
And I started countin' phone poles
Going by at the rate of four to the seventh power
Well, I put two and two together
And added twelve and carried five
Come up with twenty two thousand telephone poles an hour

[Verse 11]
I says, "Earl, I'm not the type to complain
But the time has come for me to explain
That if you don't apply some brake real soon
They're going to have to pick us up with a stick and a spoon"

[Verse 12]
Well, Earl rared back, cocked his leg, stepped down as hard as he could on the brake
And the pedal went clear to the floor and stayed right there on the floor
He says it's sorta like steppin' on a plum

[Verse 13]
Well, from there on down it just wasn't real pretty
It was hairpin county and switchback city
One of 'em looked like a can full of worms
Another one looked like malaria germs

[Verse 14]
Right in the middle of the whole damn show
Was a real nice tunnel, now wouldn't you know
Sign says clearance to the twelve foot line
But the chickens was stacked to thirteen nine

[Verse 15]
Well, we shot that tunnel at a hundred and ten
Like gas through a funnel and eggs through a hen
We took that top row of chickens off slicker than the scum off a Louisiana swamp

[Verse 16]
Went down and around, around and down
And we run out of ground at the edge of town
Bashed into the side of the feed store
Downtown Pagosa Springs