Repeating the Lesson: Doing what I didn't want to do

Barbara is a peace activist and hosts a peace podcast, doing 15-minute interviews with a wide range of luminaries on their views on peace. She wanted me to do an interview with her, but I kept going through all those pesky little mind reasons for resisting ... not knowing what to say, not liking to be on camera, not being familiar with Zoom ... etc. etc. However, Barbara is a hard person to say no to ... she is one of the most positive, encouraging, joyful people I've ever met, however, she's also persistent in the sweetest, most gentle way. So, finally, I thought of something I might talk about and said "yes."

After worrying about and mapping out my presentation that only loosely touched on peace, the morning of the recording, I took a leap and threw it all away. I had awakened with the idea that personal peace is like a two-sided coin ... one side gratitude, one side generosity. I decided that idea was enough to launch us into a conversation. And, it was.
We had fun conversation, laughed a lot, and she made it as easy as sitting in her living room. Later that afternoon, I thought: that was so fun I want to do it again.

This isn’t the first time I’ve learned this lesson about doing things I'm resisting, and every time I re-learn it, I think I won’t have to again. However, it doesn’t seem to work that way. This seems to be one of those lessons I guess I’m going to have to repeat until I truly get it.
Thanks, Barbara, for being such a gentle and generous teacher. To see more about Barbara and her podcasts, click here. 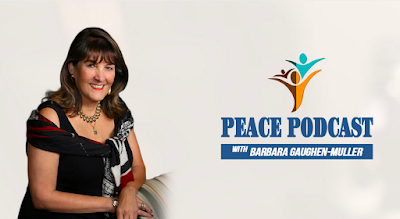