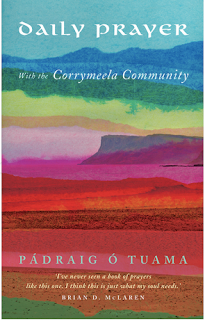 Love in the Time of Corona offers a beautiful prayer from the Corrymeela Community which draws on the spiritual practices of Northern Ireland's longest established peace and reconciliation organisation.

For over fifty years, Corrymeela has been bringing fractured communities together and resourcing others in the work of healing conflict.

Pádraig Ó Tuama is a poet and theologian and in this collection, he brings the lens of poetry to prayer, particularly exploring the ancient form of “Collect”. He highlights how form can be a collecting place for the human condition. In a sonnet, one can find the depth to contain uncontainable sentiment. In the form of Collect, with its five steps, one can find a structure to contain hope.


Click here to listen to this peaceful reading by Karen Green.

Daily Prayer with the Corrymeela Community by Pádraig Ó Tuama

It is in the shelter of each other that people live.
It is in the shadow of each other that people live.
We know that sometimes we are alone and sometimes we are in community.
Sometimes we are in shadow and sometimes we are surrounded by shelter;
Sometimes we feel like exiles in our land and in our language and in our bodies,
and sometimes we feel surrounded by welcome.
As we seek to be human together,
may we share the things that do not fade:
generosity, truth telling, silence, respect and love.
And may the power we share be for the good of all.
We honor the source of this rich life
And we honor each other, storyful and lovely
whether in our shadow or in our shelter.
May we live well and fully with each other.
Amen
About: Corrymeela was begun in 1965 by Ray Davey, a former chaplain in World War II, and a group of students from Queens University. During the war, Ray was captured and incarcerated in a prisoner of war camp in Dresden and there bore witness to the bombing of that city. This experience profoundly changed him.

He returned to work as a chaplain in Belfast and became concerned at the tensions brewing between people of different political, religious and ideological differences in Northern Ireland. Corrymeela grew out of this concern. It began before “The Troubles and continues on after “The Troubles,” promoting tolerance between people of differing backgrounds and beliefs. Corrymeela offers space for an analysis of the underlying dynamics of conflict, fracture, scapegoating and violence that we see across so many spheres of our world today.