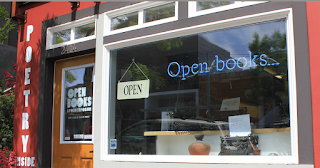 The next three poems of this poetry month celebration were recommended by people who truly know poetry: the folks at Seattle's Open Books: A Poem Emporium who generously helped me fill out the schedule.

Imagine reading in a comfy chair in a tiny, inviting space brimming with over 10,000 new, used, and out-of-print books ... all poetry. In fact, Open Books is one of only two or three poetry-only book stores in the country and offers a wide variety of readings and other poetry-oriented events. Of course, right now, you can't do that because the store is closed because of the coronavirus.

When owner Billie Swift had to close the store, it was clear that she needed to start selling books online. However, she knew she wanted to maintain some of the look and service offered to people who came into the store. She didn't want just a fulfillment warehouse so she kept all the staff and designed a process that would replicate as closely as possible the store experience. Email questions are encouraged and staff picks showcase new and important work.
So, here's the first recommendation from Open Books: Craig Santos Perez, whose book Habitat Threshold just came out this month from Omnidawn. One of the gifts of this pandemic has been a healing of the planet, even if temporary.

Jeric Swift who made this recommendation stated: "Perez has always been a champion for the environment and for Pacific and Indigenous communities. This poem of his speaks to me because of the way it reads, its repetition actually changing the way I breathe while reading it. It's such a poignant reminder of the breath, the air, we share with all species."

Shelter in Poems: A Virtual Poetry Reading
Posted by Joyce Wycoff at 5:00 AM