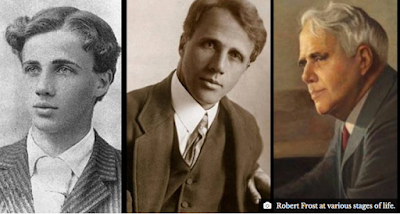 Wikipedia tells the story of Frost writing this poem:


Frost wrote the poem in June 1922  (age 48) at his house in Shaftsbury, Vermont. He had been up the entire night writing the long poem "New Hampshire" and had finally finished when he realized morning had come. He went out to view the sunrise and suddenly got the idea for "Stopping by Woods on a Snowy Evening". He wrote the new poem "about the snowy evening and the little horse as if I'd had a hallucination" in just "a few minutes without strain".

The perfection of the intricate rhyming pattern and the allusion to death make this poem memorable, and it's difficult to imagine that it came fully crafted.


In the early morning of November 23, 1963, Sid Davis of Westinghouse Broadcasting reported the arrival of President John F. Kennedy's casket at the White House. Since Frost was one of the President's favorite poets, Davis concluded his report with a passage from this poem but was overcome with emotion as he signed off.

At the funeral of former Canadian prime minister Pierre Trudeau, on October 3, 2000, his eldest son Justin rephrased the last stanza of this poem in his eulogy: "The woods are lovely, dark and deep. He has kept his promises and earned his sleep."

In a letter to Louis Untermeyer, Frost called this poem his best bid for remembrance. He is well remembered.

LISTEN to the poet himself reading this lovely poem.