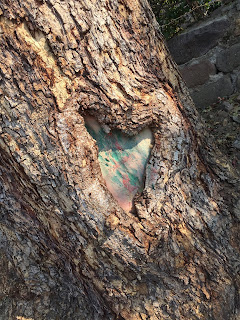 This is first poem that ever hit me hard enough to memorize it. I'm not sure if I identified with the rebel being shut out or the one with enough love to bring him in, but somewhere in there was an emotional connection.

“He drew a circle that shut me out-

Heretic, rebel, a thing to flout.

But love and I had the wit to win:

We drew a circle and took him In!”

Edwin Markham was the Poet Laureate of Oregon from 1923 to 1931. One review, however, makes me think my poetry leanings could be outdated:

"In his day Markham managed to fuse art and social commentary in a manner that guaranteed him a place among the most famous artists of the late nineteenth century. His reputation has faded because of the somewhat dated nature of his verse; nevertheless, he remains a notable figure for his contributions to American poetry.

His work stands as an example of what American critics and readers valued near the turn of the century. His poetry offers insight into an important phase in the development of American letters."