Nevada: Exploring Ghosts in the Sky 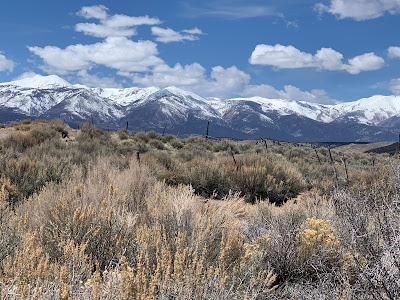 Nevada is a big, open state … seventh in size, 32nd in population. Outside the major population centers of Las Vegas and Reno/Carson City, lies space … gloriously diverse space: more mountains than California, the driest desert in the US, the largest alpine and second deepest lake in the country (shared with California), rivers, farmland, mineral mines, and a great basin containing the ghost of a lake that 12,700 years ago would have been one of the largest in North America.

Beyond the geography, there is something about Nevada … from its unique shape to its tendency toward libertarianism (which made gambling and prostitution legal). There’s a quality here .. a rough-edgedness that defies polishing, a defiance of the norms of others, a quirkiness. I’ve never seen this, and it probably does not exist, but I wouldn’t be surprised to find a slot machine in a church. 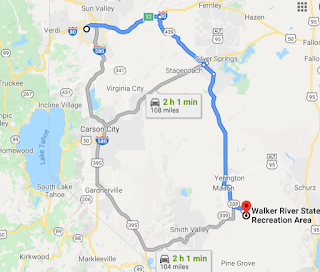 Not much about Nevada would surprise me … which makes it a delightful place to explore. So, when Reno weather finally showed potential for an outing and the shelter-in-place blues had set in, I set off with the kids for the Walker River State Recreation Area. (Nevada’s stay home guidelines have an exception for outdoor activities for family only groups.)

One thing about open space is the helter skelter worm trails of the world beyond real roads ... which means you are seldom confident about where you’re going … not exactly lost, but definitely not found.
We were looking for a hot spring when we found a selenite field that glittered like gold in the sun. Suddenly, we were greedy children picking up Easter eggs.

Wikipedia says selenite is a form of gypsum occurring as transparent crystals, sometimes in thin plates and offers this bit of history:

The etymology of selenite is through Middle English selenite, from Latin selenites, from Greek selēnitēs (lithos), literally, moonstone or stone of the moon, from selēnē (Moon). The ancients had a belief that certain transparent crystals waxed and waned with the moon. From the 15th century, "selenite" has referred specifically to the variety of gypsum that occurs in transparent crystals or crystalline masses.

9-Mile Ranch
Long before John Fremont discovered this part of the world in 1844, the Paiutes were here, living and leaving the land basically untouched. The discovery of gold would change all of that and the 9-mile Ranch (then known as Cobb Ranchero) became the toll booth on the Carson Valley - Esmerelda (later Aurora) toll-road.

Sam Clemons suffered a financial set-back related to the ranch. Nevada laws required a mining claim to be worked within ten days. When he volunteered to help care for a sick man at the Ranch, he left a note for his partner. Apparently the note was never found because they lost the valuable claim to someone else when the mine wasn't worked within the ten days.

In December, 2016, an earthquake damaged the structure and it is now fenced off. 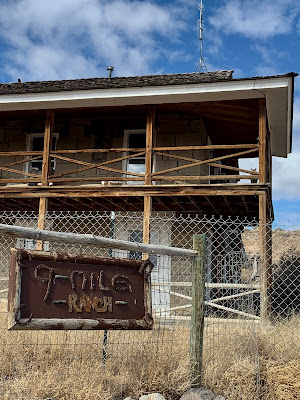 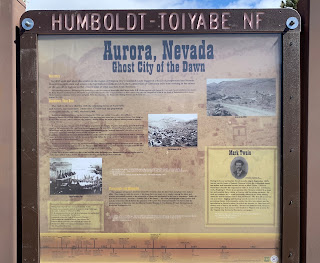 In April, 1862, young Sam Clemens experienced his first life failure. He came to the gold boom town of about 2,000 inhabitants to attend to his brother Orion’s mining claims. He spent several months digging and blasting tunnels but made almost no money and was forced to live off the money his brother sent. “Broken and disappointed,” he left Aurora for Virginia City where he wrote for the Virginia City Territorial Enterprise newspaper, which includes a Mark Twain Museum although I’m not sure if it is still open.

The area was rich in gold and reached a population of 10,000 before the gold ran out in 1970. Today, new methods of gold mining are devastating the mountains and fencing off the hazardous chemical ponds from the public. Mining is one of the biggest employers in Nevada and balancing the value of jobs versus the value of the planet is a dangerous dance.

Today, there are a few remnants of that once vital town, but perhaps the most touching is the cemetery which scatters through the pinyon pines. It is a peaceful place, many graves still decorated with colorful, plastic flowers. My daughter and I both had a "this would be a nice place to be buried" feeling.

Visitors to the war memorial have decorated it with a wide assortment of treasures: from bullets to beer, coins to a ball point pen, desert glass and rocks to a tattered flag. We added a few mementos to the altar and continued on our exploration. 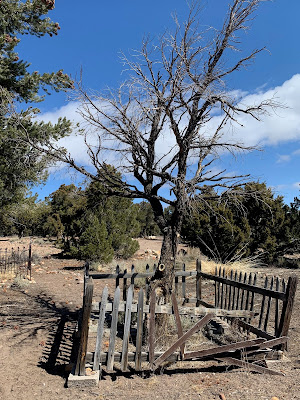 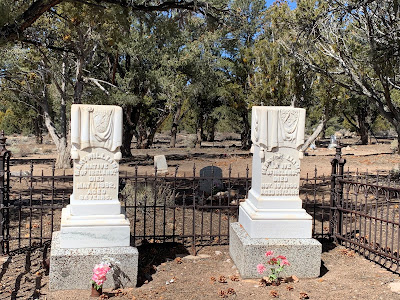 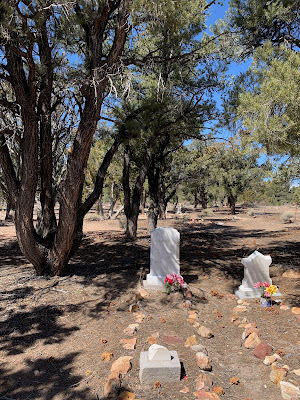 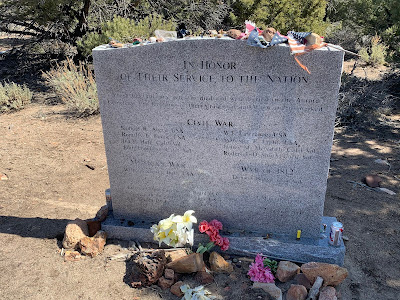 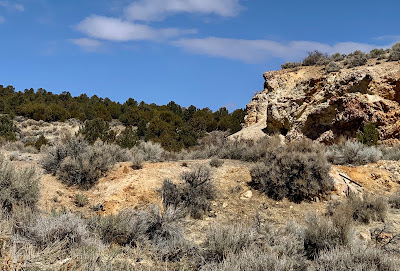 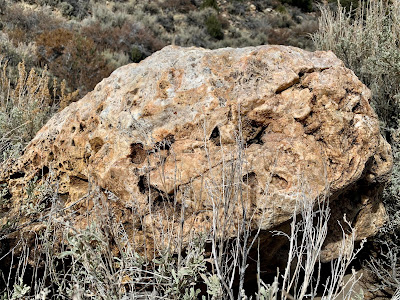 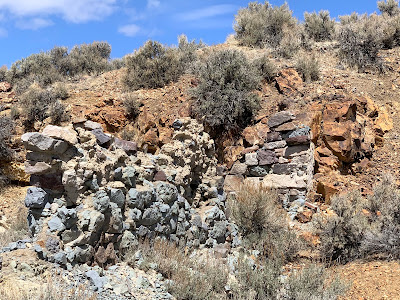 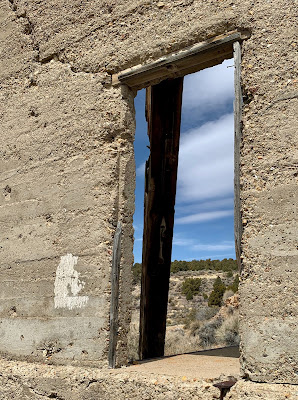 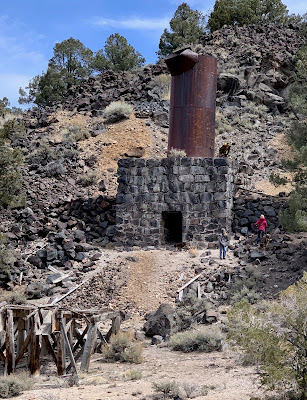 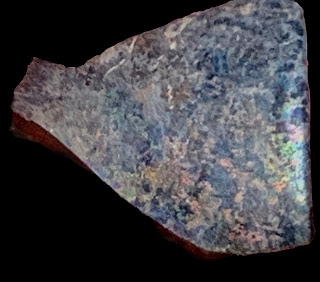 Grandmother Cottonwood
Annie had us stop at this stunning old cottonwood to gather "witches toes," the medicinal buds that fall off the tree. They are apparently highly beneficial in salves, gels, or massage oils for their anti-inflammatory and analgesic properties. 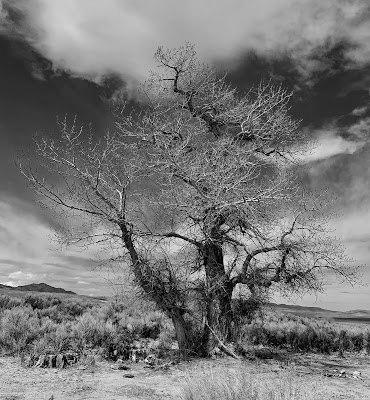 We wound up falling in love with this tree and found a ground nest beneath her limbs. 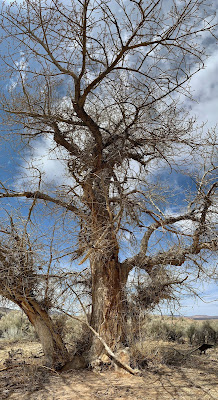 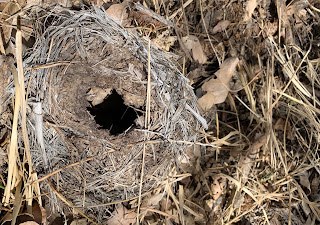 Here are more photos from the trip:
If I'd had a forklift, I would have brought this rock home with me. 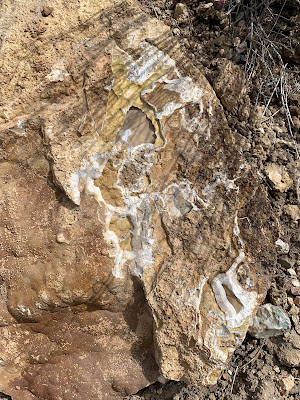 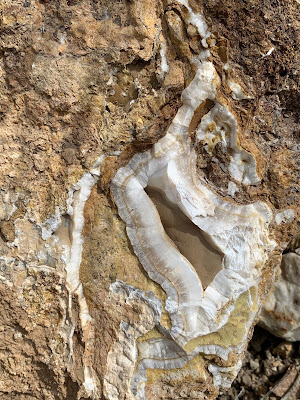 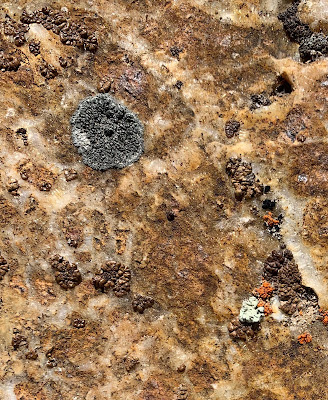 And, as often happens in the desert,  you wind up with more questions than answers: 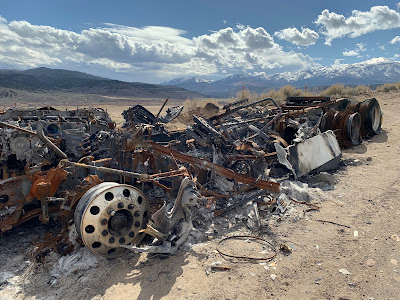