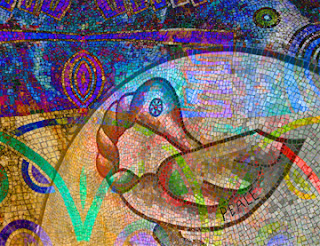 This past weekend I was in a workshop with Michael Meade and got to see synchronicity in action.  Michael's life has been an intriguing journey into story and mythology and was inadvertently launched when his aunt gave him a copy of Edith Hamilton's "Gods and Goddesses" for his thirteenth birthday (she had intended to give him a book on history but picked up the wrong one).

Being something of a rebel and a rule-breaker, when Michael was drafted into the Vietnam conflict in 1965, he decided it wasn't a declared war so he shouldn't have to go.  Obviously that didn't start his Army career off to a good start and when he told them he wasn't going to "kill people I didn't know for a reason I didn't understand," he wound up in a military prison in Panama.  For reasons he didn't fully understand then, he decided to quit eating and over a period of 8 weeks went from 154 pounds to 87 pounds and was frequently told he was about to die.

As he told this story to us in the workshop, he discribed the visions of gods and goddesses from the Hamilton book he had during this ordeal and how it sealed his fate in story and mythology.  However, later in the workshop, someone asked him how he got out of prison.  He said he really wasn't sure but what he had heard was that some guard had called Bobby Kennedy's office and told them that one of his constituents was dying in a military prison in Panama.  As the story goes, Kennedy called Panama and told whomever that if his constituent wasn't released immediately, he was coming down there in person.

The story gets stranger.  Apparently Michael has only recently started telling this part of his story and at a recent workshop, a woman came up to him later and told him that she had worked with Kennedy and wondered if Michael knew what Kennedy had been reading at that time.  Of course he said he didn't and she explained that RFK had been so devastated by his brother's assassination that Jackie Kennedy had suggested that he might find comfort in the ancient Greek myths and gave him a copy of Edith Hamilton's book, "Gods and Goddesses."  At that point in the story, we were gripped by invisible thread weaving through Michael's life, but more was coming.

After Michael told this part of his story, a participant in the workshop added to the thread.  He had told us earlier that he was an activist film-maker turned teacher.  He was a tall, thin man with a quavery voice and he touched us with his story of working with his students. Now he stood and told us that he had planned to talk to Michael the day before about a book he was starting to write but had never found the right time.  Now he knew why ... the story was still unfolding.  He told us that he had been working on the RFK campaign and was there the day Bobby was assassinated.  As he said, "When the shots rang out, I was the one that grabbed the microphone and tried to calm the crowds so when the news broke on television, what many people saw was a tall, pale man with a quavery voice telling them that Kennedy had been shot."

By the time he finished, the emotion in the room was palpable.  Many of us in the room were old enough to have felt personally wounded by the season of assassinations and the synchronicity of this continuing story of connection and the web of life moved us all deeply.