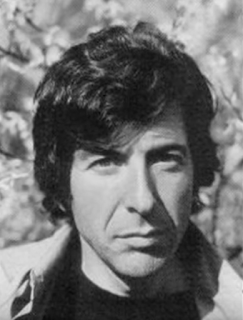 Wikipedia: I'm Your Man is the eighth studio album by Leonard Cohen,[2] released in 1988. The album marked Cohen's further move to a more modern sound, with many songs having a synth-oriented production. It soon became the most successful album which Cohen had released in the US, and it reached number one in several European countries, transforming Cohen into a best-selling artist.[3]


Cohen said of the song "I'm Your Man": "I sweated over that one. I really sweated over it. I can show you the notebook for that. It started off as a song called "I Cried Enough for You".

Click here for the vidoe of "I'm Your Man."

Author Sylvie Simmons discusses her new book I'm Your Man: The Life of Leonard Cohen"with Liel Leibovitz, senior writer, Tablet Magazine Simmons and Leibovitz discuss the fascinating life of the iconic singer-songwriter Leonard Cohen- a Rock and Roll Hall of Famer and descendent of a Talmudic scholar- whose brilliant career has spanned more than four decades.
Posted by Joyce Wycoff at 5:42 PM