Love Letters to my life #18: Before and after moments

Before and after moments

(We know the day we were born, but most of us do not know the day we will die. This love letter to my life is written on the day I've designated as my death day, the 17th of every month, and reminds me to be grateful for my incredible life. This month, I get to celebrate both my death day and my birth day on the same day!)

Thirty years ago, a publisher offered me a contract on a book about mindmapping; thus, I became a published author. Before that moment, I wanted to be a writer. After that moment of validation, I accepted that I was a writer. That book opened doors that never would have opened otherwise; however, even bigger, it opened doors within myself as I accepted myself as a creative person.

We don’t get many of those before and after moments … and sometimes it takes a while to recognize them. I think I’m having another one now; it began five years ago even though, at the time, I didn’t recognize it as anything other than just another finished project.

My older granddaughter Ava was turning thirteen, and I wanted to give her something to commemorate that transition. I made a small book with photos of her life and called it Rainbow Dreams, the beginning of the Ava Danielle Bourg story.

It was a project filled with delight and I invited some of my wise women friends to join the party. They wrote letters to Ava about what they wished they had known at age thirteen, and I included a brief biography of each of them so Ava would know a bit more about each woman who was sharing with her.  (Book created using Mixbook services)
Ava was just beginning her teenage life, and it may take another thirty years before she fully appreciates the wisdom and love that infuses that book. However, for me, when it arrived in the mail, the thrill was instantaneous. It still delights me as it is also a part of my own life. More than all the books I’ve published through the normal channels, this one holds my heart and is one of my prized possessions.

However, it remained just a completed project I was particularly fond of … until I met with a program director at our local community college a few weeks ago. We didn’t have much of an agenda when the meeting began: she was open to the idea of my teaching something in the area of writing and I was intrigued with the idea of teaching, although not so keen on the idea of being tied down to a weekly class.

We talked about the extension program and how it worked: I could design a class with as many meetings and hours as I wanted. That sounded good, so I talked about some of the things I’m interested in and told her about my current book in progress of photos, art, and stories about my two years in Mexico. As the meeting was winding down, one of the ideas I threw out was about helping people make their own personal photo books. The idea clicked with her; and, I felt the idea click within myself.

By the time I reached home, the idea was burning bright: I was anxious to find out more, figure out the next steps and how to make the process easy, engaging and enjoyable. The book I had made for Ava was a process that most people do not have the time or tools for: every page was created from scratch with Photoshop and took months to complete.

The idea of helping others with this process quickly grew bigger. I thought about the boxes and albums of pictures I inherited from my mother … photos with no names, places or dates. With no indication of who these people were, they were just bits of paper. Family legacy books would provide a tangible way to make those photos meaningful and keep family and stories alive.

Also, simple, inexpensive photo books could honor our own lives. With camera phones in every pocket, we are building store houses of pictures that were important enough to us at the time to snap the picture. Now they live in a hidden world and we occasionally thumb though thousands of pictures to show someone something we liked or was meaningful in some way.

All those memories are going to evaporate unless we become the curators of our life. Lots of us talk about writing the book of our lives. However, it’s a daunting task: who would publish it? Who would read it? It would take forever. I can’t write well enough. So many questions and self-doubts.
Becoming the publishers of our own life
There are already dozens of photo book providers who inexpensively publish beautiful books of photos and words. And, almost everyone I talk to has thought about this possibility, although few have actually done it. What is the barrier? Time? Intimidating technology? I would love to hear your thoughts.

I have selected two vendors to focus on and make sample books with: CostCo Photo Center, the cheapest source (you don't have to be a member) and Mixbook which offers more options but is still reasonably priced (Ava's book).

It’s still early in this process, but I think my life is in the “after” mode. For now at least, I’ve decided to forget the whole commercial aspect of writing and agents and publishers. My writing/photography/art life will circle around making small, limited edition, personal books about my life … and helping others do the same.
One of my favorite things in Mexico was taking pictures of the incredible murals there. Here's the front and back covers of the small book I created about them. 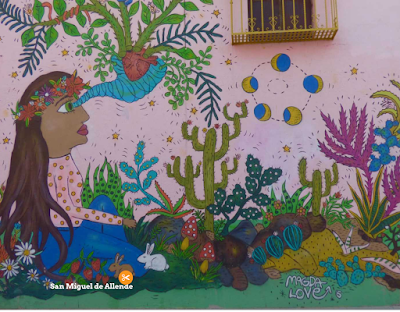 And here's a small book from a poem:
I believe these small, simple books are a way of loving, and making love to, our lives and leaving a gift for the future, so, today, I’m changing my email signature … always a sign of life direction … 😉 … adding:

I make books about my life … and help others make books about theirs.
Don’t just love your life … make love to your life!
(A free electronic, magazine version of I Want to Be a Mockingbird is available here.)
Posted by Joyce Wycoff at 5:00 AM