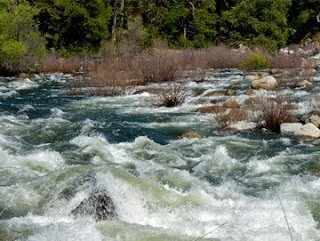 It's gratitude Sunday and I just came back from kayaking on Bass Lake so this week's gratitude is water.  How fortunate most of us are to have clean drinking water and lakes, rivers and streams that invite recreation and renew our spirits. After the BP oil spill in the gulf, there is an even deeper feeling of gratitude for this abundant and life-supporting gift.

But what is this stuff we call water and know from grade-school science as H2O?  It turns out that even scientists don't know everything about this most basic substance and it has some very strange properties.  Livescience.com states:

Perhaps even stranger, there is a widely-held belief that water holds memory.  While not completely accepted by the scientific community, it is creating a lot of conversation and controversy.  Below is an interesting video telling the story of this thinking (this is just the first part of a multi-part series).  In the meantime, it's probably enough to marvel at this mysterious substance that forms most of our world and our own bodies ... and be grateful for it ... whatever it is.