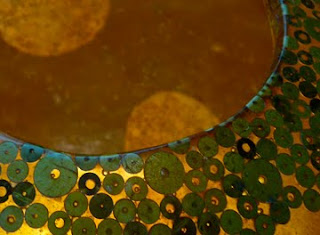 Today's post from Louise at Recover Your Joy  titled "Turning Away from Nothing" began with this quote from John Muir:  "When we tug at a single thing in nature, we find it attached to the rest of the world."  Her words threw sparks into the my own bubbling cauldron, resulting in the following:

I once had an illusion and believed it was Love.
Till it curled away like smoke in a gentle breeze,
I tucked the last wisp and my confusion
Into a tiny box placed on a dark, hidden shelf.

Years later, the box reappeared and,
When opened, the illusion flew into the light,
Sparkling and radiating bright new colors.
Once again, I believed it was Love.

Too soon, it spiraled off into the morning fog
Leaving only Confusion in a hollow,
forgotten place I thought no longer existed.

This time, though, I do not stuff it in a box.
I do not turn away from it.
I fall into its nothingness.
I fall for a thousand years
Until I feel the soft center of Self
And know that this is no illusion.
This is Love, eternal, real ... everything.
Posted by Joyce Wycoff at 4:35 PM