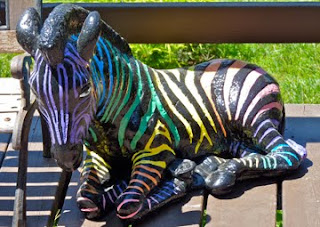 It's Saturday.  Most of the boxes are unpacked and the basics are working ... kitchen, bedroom, computer.  Missy and I took a long walk this morning and I'm in a state of lassitude (def:  a condition of indolent indifference), sitting in a shady spot on the deck, listening to neighborhood sounds, catching up on blog entries, doing as close to nothing as one can and still be awake.  Lynne's step-father calls it the "don't wanna ... don't gotta" state.  I like that.

For at least awhile, I'm dropping out, shutting down, doing what my body wants, allowing my attention to flit from the psychedelic, blue-eyed zebra, to the light and shadow dance of green leaves against blue sky, to Missy's curly white body sleeping on the deck.  The morning is gradually warming up to hot and soon I'll have to leave the deck for the comfort of air-conditioning.  But, for right now, this moment of indolent indifference is absolute perfection.

I've been trying to make a decision about going to Italy in September.  There's a lot about the trip that appeals to me:  being with poet David Whyte, hiking through the Tuscan landscape, being with a group of, most-likely, interesting people.  But, I'm hesitating.  Partly because of money.  Partly because I'm not sure it's what I really want to do.  In some ways it feels more like something I *should* want to do.  In this moment of pure, indulgent "beingness," it feels like zipping off to Italy might be chasing something that could be right here in my own backyard.

At the beginning of this year, I had two "readings" ... one astrology and one numerology.  I was struck by how consistent the messages were and have been watching the progression of the year in relationship to the readings as my own experiment in the validity of these ways of accessing information.  Both show September as being a significant month and the astrology reading calls out 9/14 as a particularly significant date.  That happens to be the first day of the Italy tour ... it also happens to be my granddaughter Ava's birthday.  The reading emphasizes that this is a time of internal movement triggered by external aspects and that it heralds an extremely powerful emotional change. And the numerology reading says it is a time to play and to do anything to become more of who I am.

Those messages seem to reinforce the idea of going on the tour.  However, there are many ways both of these messages could play out so I've been trying to think of other ways to honor the information offered by them.  For now, I've decided to just be patient and wait for something to give me a clear signal.  So perhaps this indulgent morning on my new deck isn't just being lazy, perhaps it's getting quiet enough to allow the Universe to whisper in my ear.
Posted by Joyce Wycoff at 12:05 PM