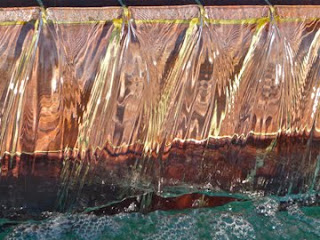 Some patterns play themselves over and over through our lives.  One that seems active for me right now is the fall rite of passage for Lucy and Charlie Brown.  It is as reliable as carved pumpkin faces that sag and slump on stone cold porches long after the last bit of Halloween candy has disappeared.  Lucy assures Charlie Brown that this year she'll hold the ball steady for his triumphant kick. "Trust me," she says and offers ever-ingenious reasons to believe. But, true to form, at the last minute she pulls it away and Charlie winds up flat on his back.  Why does he believe her even when we're screaming at him that it's a trick?  And, what is the fiendish power that makes her continue to torment her friend?

I find myself, like Charlie Brown, wanting to believe, grasping at each new reason to trust, desperately wanting to kick that football, even when everything inside shouts "Stop! Don't do it! It's a trick!"  But, on I go, and the inevitable result is ... well, it's own inevitable self.  So, as I lie here flat on my back once again, I wonder:  is it better to keep giving Lucy a chance or should I give up the dream of that perfect kick?  Lucy is a cartoon character and she will never change her stripes.  But, people are real and they can and do change.  In the real world, Lucy could decide to stop her game ... or Charlie could decide to quit handing his power over to someone who can't be trusted.  But, if Charlie Brown stops trusting, does he run the risk of hardening his soul, losing that precious innocent belief that people do change?  If he forever gives up his dream of that triumphant fall kick, is it one step toward the loss of his youth and passion and possibility?

So, I get up, dust myself off and decide it's time to take myself outside the black-and-white world of cartoon and find a new option, a third possibility other than to kick or not-kick, trust or not-trust.  It's obvious that Charlie's yearning for the glory of the kick is clouding his judgment, so he can choose to refocus that yearning onto a new goal ... or he can find allies to help him determine the reliability of Lucy's change-of-heart promises.  Either way breaks the cycle but it also allows for the possibility of real change in Lucy, a possibility that always exists in the human species, a possibility that, if it did not exist, would make life unbearable.

So, bring on the football, Lucy.  My allies and I are ready to listen to your siren song again.  And, this time, for your sake, let's hope you're playing a new game.  As for me, I can play this game with you ... if it's real ... or I can move on to a new game.