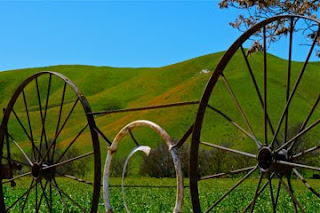 This morning I am pondering the warp speed of life as I sit looking out over the Santa Barbara Mission, the ocean and the Channel Islands in the distance.  The morning is pink and warm, exactly what I thought I wanted when I decided two months ago to spend six weeks soaking up the green California spring.  Sometimes it seems, though, that life has its own plans which makes me wonder about the inner workings of fate and free will.  How much of the unfolding of our lives is already written and how much do we hold in our own hands?

In some ways it seems like a playful dance of inertia and momentum. Once we start to move, there seems to be grooves we slip into that lead us almost effortlessly to places we never expected. Two months ago I was in Colorado yearning for spring.   That yearning started the motion that now seems to be rolling my life onto a completely new path toward a new place to live and new work.

Last Friday I met with people from a company I've been associated with for the past three years.  They write educational master plans for community colleges and three years ago I was involved in a small way with the writing of a plan for a new, public high school in the Sierra foothills.  It was one of the most exciting projects I had worked on but when it was finished, there was no thought of doing anything more with them or the project and I moved to Arkansas thinking that was my "happily ever after" life.

But, the school got built and is now rapidly becoming an exciting success story and I was invited to come back and look at what they created, partially by using our master plan but mainly by the shear energy and vision of the school leaders and community.  As we talked, ideas began to flow, energy surged and by the end of the day, a tangible trajectory was in place.  We are starting the process of documenting the successes of this school with the idea of being able to share the processes and principles with other schools.

It's a fledgling project but enough to pull me back to California and into the world of "work."  I've been studying the world of intention for the past several months but sometimes I wonder which is more powerful ... our conscious "intending" or our less conscious "yearning."  As I watch my own life morph into new shapes, it seems like if I just follow my yearnings, wonderful new things appear which I wouldn't even have thought about intending.