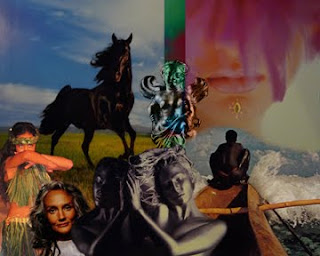 A few weeks ago, I was trying to make a decision and kept spinning in a circle getting nowhere.  So I decided to get help from my guardian angels.  The only problem was that I didn't have any ... or rather I didn't know any of them so I set off on a journey to meet them.  It wasn't a long journey ... it meant going into my everything room and pulling out the large box of images I'd collected over the years.  It did take awhile though as I went through thousands of images pulling out the ones that spoke to me with no thought of why.

After a couple of days, I had seven images that had raised their hands, shouting, "Me! Me!"  So I sat down with them and asked them what they wanted to tell me.  And, they did.  I made the decision that closed one door and almost immediately opened another one that beckoned me onward.  (For a beautiful post about doors, go to Almost Paradisical ).

So I thought I'd introduce you to each of my guardian angels ... there are seven of them so we'll meet one each day.  I'm trying to make a decision about where to live so I'll once again ask their advice.

The Trail Blazer (lower right hand corner) -- fearless, balanced and strong, he sees perfectly and clearly everything ahead of him.  He is one with nature and senses the slightest shifts in currents, winds and conditions.  He guides me flawlessly toward my North Star.
Posted by Joyce Wycoff at 9:25 AM