Words and images playing in a metaphorical field

"The only thing that keeps
a person going is energy.
And what is energy but liking life?"
— Louis Auchincloss

In my long-ago working life, I touted the benefits of metaphorical thinking, proclaiming that you could find a way to link any two things together and thus gain insight about either of them.

This morning, I decided to test that concept with two extremely unrelated images shown below. Now, I will spin the metaphorical metaphor wheel and see what happens.
First image: A clown I found on a wall in Eureka, CA. 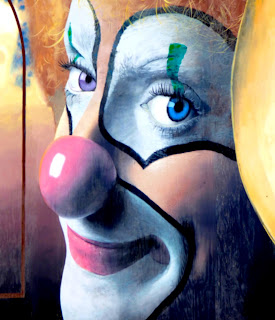 Second image: a trimmed plant revealing its inner nature, found in the garden at the Lake Chapala Society here in Ajijic, Mx. 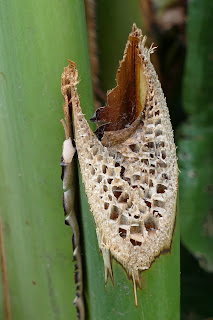 Both images intrigue me, each for different reasons. The look on the clown’s  face makes me think some inner information is bubbling up, lighting up his multi-colored eyes, ready to spill over into guffaws. The cut stalk of a plant with its holey and woody texture makes me wonder at the unseen world, now revealed by a gardener’s machete.

How do these two relate to each other? Thoughts: One was never alive except in an artist’s imagination. The other’s life was altered by a human viewpoint of the way things ought to be. Both subject to the whims of another.

The clown puts on a mask to entertain, attempting to create mirth or surprise in others. The plant has evolved into a moisture- and nutrient-collection system in order to survive and thrive.

Both are products of an unknown artist, be it a human with pots of paint, or time with its eons of tweakings to maximize well-being, or a mystery force too massive for our comprehension.

The insight … duh! … is that everything is part of life. Living things obviously are alive, but even those things that look inanimate … murals on walls, buildings that topple when the ground quivers, boulders on their journey to becoming sand on a far-away beach, a spoon, conceived by a brain and implemented by hands to deliver nourishment to a collective of cells and bacteria we call the human body … all play their part of the web of life.
When they came together in Photoshop, these two images did not want to play together. I tried to tell them this was just an exercise, but they decided to make me work for it. Finally, they transformed each other and I could hear them whispering, but what they were saying, I'll never know.
Day 8/100