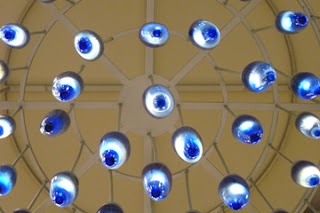 In a land not so far away and a time not so long ago, there lived a small toenail cell living an ordinary, every day life.  She did her work, processing incoming nutrients and outgoing waste, signaling when danger approached, chatting over the back fence with her neighbors.  She was a smart cell, aware of what went on around her and quick to react to changes and circulating rumors.  She had heard she was only one of 50 trillion cells that made up her world (give or take a few dozen) but math had never been her long suit so she wasn't quite sure what that meant.

One day an old cell, one of the cells known as the wise ones, told her a fantabulous story about a universe beyond the wide world that she had learned about in school, a universe where miraculous things occurred.  He talked about something he called light and how it created a beauty known as color and about pulsing rhythms that came from this other world yet changed the tidal flows that saturated their world.  He told about his visions of that universe and other universes beyond, universes that were even larger and more amazing ... that actually the world was without end. He told her the great secret of his vision: that she was part of this endless universe, that she was eternal, a part of the Whole, something he called Source.  All she had to do was to believe and to have faith, he said.

Long after the wise one left, the little toenail cell sat in dazed confusion, trying to imagine how such an immense universe came into being and where she fit into it and what it meant to believe and have faith.  She struggled long and hard but the confusion sat like a hard lump in front of her.  As she sat, the incoming nutrients weren't getting processed and the outgoing wastes were backing up.  She started to shrivel and her neighbors began yelling at her and throwing trash into her backyard.

One day, she shook herself and said, "I don't know.  I don't know what's out there.  I don't know Who created all of this or What it's all about or Why it's so complicated.  But, I do know what my job is.  Then she went back to work processing incoming nutrients and outgoing wastes, keeping watch for danger, signaling when something went wrong, and happily chatting with her neighbors over the backyard fence.

And, if something hasn't changed, she is there still in that land not so far away, in that time not so long ago.
Posted by Joyce Wycoff at 9:00 PM