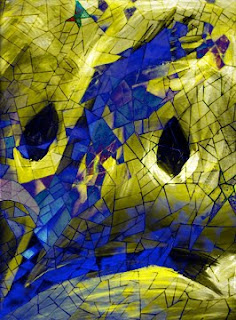 Thoughts prompted by the Awareness Jar:  Tuesday I was feeling powerful and centered.  On the way to my weekly mosaic class, I glanced over at the banana that was part of my lunch for the day.  It was just laying there on the car seat but I had a sudden impulse to eat it right then, while I was driving, even though I had just eaten cereal with a banana.  I was not hungry and hadn't thought about eating until I saw the banana.  Now I wonder what triggers those impulses which I call:  see food; eat it.

I am reading Geneen Roth's "Women Food and God, An Unexpected Path to Almost Everything" and thinking about food as a symbol for something I want, something I've always wanted but didn't get and don't know how to get but keep trying to get through food.  Food is the most interesting addiction since we can't "just say no."  We have to eat.  Our body gets hungry and wants food.  But when we eat outside that hunger it's symbolic and has come to symbolize a myriad of things ... most of our social activities involve some sort of sharing of food.  But, beyond physical hunger and social rituals, there is a type of "shadow eating" that tries to fill a space we can't see and don't understand.

I got caught up in the mosaic class and didn't think about the banana impulse again until it was time for lunch.  I ate mine and was fine but some of the other women brought snacks to share and I found myself eating pretzels and peanuts ... which were great, of course, but I wasn't hungry and I wasn't eating with any awareness.  Some of it was the social thing but even more it was just seeing food and eating it in an autonomic response mode.  After all, I might never get peanuts and pretzels again. Why does this happen?

Obviously something in my past told me that if I didn't eat something as soon as it showed up, I might not get any later.  Something says "grab it before it gets away."  And, it's obviously not just be about food ... it probably includes love, friendship, and physical stuff.  I've often made decisions based on the assumption that if I didn't decide right this instant, the whatever-it-was would be gone.  As I write this I can actually feel the anxiety of losing out on something I want, not getting the shiny object calling to me, never again having the chance to have it.

It could be genetic going back to the days when people had to eat whatever they found whenever they found it.  But, some how, I think it's probably based on more current beliefs.  Most of our deep-seated beliefs are instilled in us by our parents, our circumstances and the other adults around us before we reach the age of consciousness (somewhere between 4 and 6).  In some ways, we are two people ... that inner self that is actually a reflection of those adult voices ... and the self we develop consciously as we grow and mature.  No matter how mature we become, we are always dealing with that subconscious inner self ... what many call the ego.  Because those beliefs formed before we had consciousness and often even language, it's very difficult to recognize them and even harder to change them.

However, it really doesn't even matter how these beliefs got into my psyche;  I can look at them now (in a moment of awareness) and realize how false they are.  I have access to an unending supply of wonderful things to eat.  If I don't eat something today, it will be available tomorrow.  And, the Universe is abundant in its offerings.  If I miss out on something today, something else, perhaps even better will show up tomorrow.  And, if it's about love, I can offer myself the unconditional love and support that I might have missed in my early life.

Intellectually I know that but obviously some part of me still operates on a three-year old level of fear, abandonment and lack.  Roth says that awareness is the key and states:


"With awareness (the ability to know what you are feeling) and presence (the ability to inhabit a feeling while sensing that which is bigger than the feeling), it is possible to be with what you believe will destroy you without being destroyed."  She goes on to say, "All any feeling wants is to be welcomed with tenderness.  It wants room to unfold.  It wants to relax and tell its story.