The Center of the World brought me to tears

Expectations are always interesting. I live on the edge of the Anza Borrego Desert which is dotted with places that attract misfit artists who create amazing, colorful art out of society’s debris. Places like Salvation Mountain/Slab City/East Jesus where creativity is as abundant as demolished cars, left over buckets of paint, endless old tires, and a haunting profusion of empty television screens.

When I found out my power would be off for two days while crews upgraded power poles, I decided it was time to visit a place that had intrigued me for over a year … Felicity, California, also known as the Center of the World. I had dropped the information about it in the same “weird places” file as the other outlaw artist places that had so engaged me. It didn't take long to realize it didn't fit.

I have always been intrigued by “center of the world” stories. It seems to be a trait of the human species to tell and retell our origin stories. The ancient cultures always seem to have a story about where the world and the people began and, interestingly, that place always seems to be a mountain, cave, rock or even tree that happens to be just around the corner, somewhere in their own neighborhood.

So when I discovered Felicity and found out that it was “officially” designated as the “Center of the World,” I had to know more.

As these things often do, it started with a man with a vision. In this case Jacques-André Istel, who happens to be the mayor of Felicity, population 2. Somehow, the vote was 3-0. Mayor Istel says the third vote was cast by a dragon. The election investigation is ongoing. 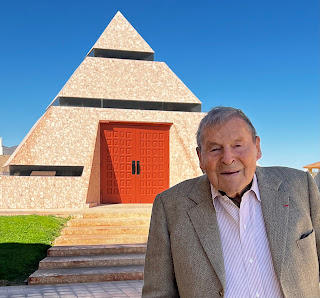 Wikipedia describes him as a French American recreational parachutist and investment banker and later in life, historian, widely responsible for popularizing parachuting in the United States. He is considered "the father of American skydiving. That fits as I was invited to return this weekend for a day of skydiving … with the main participants being women in their 80s and 90s. (Obviously, I’m not old enough... let alone gutsy enough.)

The word that stood out for me was “historian.” However, if I were writing Wikipedia, I would change that word to Renaissance man. It took only a minute or two to explode my expectation of a colorful bit of amusement into a monumental place that brought tears to my eyes.

To back up just a bit. Istel served as a Marine during the Korean War, leaving as a Lt. Colonel. Roadside America says Istel told them he had a habit of purchasing land, and in the 1950s he bought 2,600 acres in the Sonoran Desert. “I told my wife, ‘I don’t know what I’m going to do with this bare land, but it has to be entertaining.'"

Maybe he was just going to enjoy skydiving in an open land. Maybe he didn’t have a vision until a dragon entered his life … or did he bring the dragon to life to serve his vision? One way or the other he decided to build a town and make it the center of the world.

Of course he did.

And, his first step was to write a children’s book about a dragon.

Of course it was.

Anyway he wrote Coe the Good Dragon at the Center of the World and then convinced Imperial County to declare Felicity as the official center of the world. I bet you didn’t know Imperial County, California was in charge of things like that, huh? They have to do something in those hot summers there. 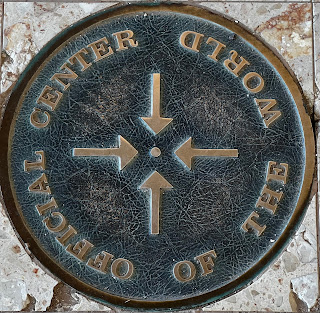 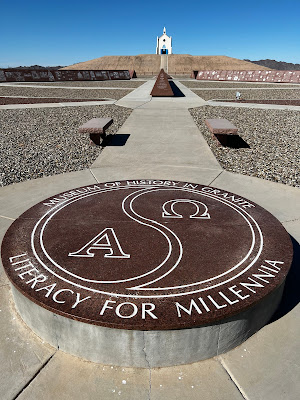 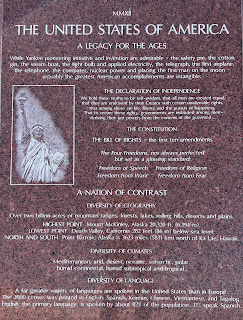 So there it is now, a desert mirage honoring humanity with a museum, a 25-foot staircase going nowhere, rescued from the Eiffel Tower, a pink pyramid marking the exact center of the world and which grants visitors a wish if they promise never to tell (and pay their $3 for a certificate), and a perfect chapel on a hill … which he built with 150,000 tons of dirt because a church should be the highest spot around.

While all of this is whimsical and fun, that’s not the part that took my breath away and made me teary. Between the pyramid and the chapel there is a monument to humanity, titled Museum of History in Granite. It’s more like a maze of over 500 beautifully incised triangular granite billboards spelling out our history, our geology and biology, our laws and wars, our art and literature, our religions and our wisdom. It was like seeing a family reunion portrait when everyone was young and loved each other. 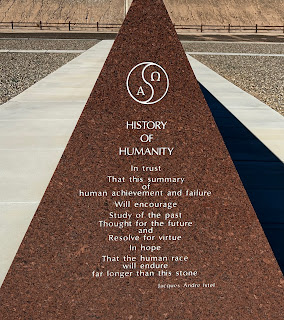 Mike Anton, in an article for the Los Angeles Times, captured the scope of this monument:

... eight horizontal monuments spread out like spokes of a wheel between the church and the pyramid. When completed, it will serve as a Cliffs Notes of life on Earth: 416 kitchen-counter-size granite panels etched with words, timelines and drawings.

The Greek philosophers. Early music. Buddhism. The Han Dynasty. Early timekeeping. Ireland's golden age of scholarship. The evolution of math. Our sun. The night.
Nomadic tribes and barbarian invasions. Volcanic eruptions. Early concepts of law. Early India. Metallurgy. Sages from China. The development of bread and cheese.
The rise and fall of the world's empires over 5,000 years required five panels. An etching based on Michelangelo's Sistine Chapel ceiling, the hand of God giving life to Adam, stretches over three panels. The Renaissance will fill at least 110 panels, Istel estimates. The 20th century will need a bunch as well.

Mike was obviously taken with Istel and left us with this quote from the New Yorker magazine in 1959: "He has the unabashed drive of a young adult gorilla in especially fine condition." It is worth reading his entire article if this amazing man interests you.

If archeologists of the future find this treasure trove, they will believe us the wisest of peoples. Some people write books, Jacques-André Istel has created a monument to all of us. In this time when we seem to be hell-bent on destroying humanity, I can only hope we find our way to live up to his work.

And, I wonder if this guy will still be there? 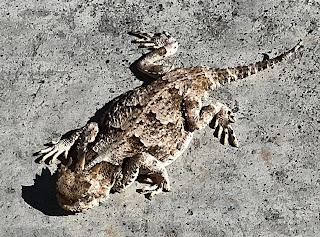 Wikipedia: In May 1985, the Imperial County Board of Supervisors designated Felicity as the Official Center of the World.

"See it now: the center of the world, The History of Humanity is being etched in stone in the California desert. The real story is the builder,"  by Mike Anton,  April 16, 2008, Los Angeles Times.
Posted by Joyce Wycoff at 7:55 PM