This week has been a high-learning time. I’m starting to recognize that I may be a better learner than doer, however I hope to find balance soon. The idea and research that captivated me this week was finding out more about the placebo effect and how it might contain seeds of behavior transformation.
The main sources of this line of thinking include an article in Harvard Health Studies which states: “Your mind can be a powerful healing tool when given the chance. The idea that your brain can convince your body a fake treatment is the real thing — the so-called placebo effect — and thus stimulate healing has been around for millennia. Now science has found that under the right circumstances, a placebo can be just as effective as traditional treatments.”
The placebo effect is a fascinating and powerful example of the mind/body connection and stimulated the work of Alia Crum, an expert on mindsets and beliefs and how they shape our responses to stress, exercise, and even to the foods we eat. Dr. Crum is an Associate Professor of Psychology at Stanford University and the Principal Investigator of the Stanford Mind & Body Lab.

Dr. Crum was a recent podcast guest on Huberman Lab, and discussed a series of fascinating studies related to our “mindset” related to specific issues. She uses the word mindset in a slightly different manner than the general usage. While we all have general mindsets and beliefs … such as:
optimistic/pessimistic/cheerful/gloomy/grateful/critical etc.
The mindsets which have been the subject of the studies discussed by Dr. Crum are related to specific issues: our beliefs about stress, or foods, exercise, or medications for example.
One of the most fascinating studies she highlights involved two malts and the measurement of changes in the level of ghrelin: known as the hunger peptide. Simplistically: rises in the level of ghrelin correlate with hunger and lowered ghrelin levels indicate satisfaction and a reduction of hunger.
The two malts were:

The ghrelin level of participants was monitored as they drank the shakes on separate sessions, one week apart. Ghrelin fell roughly as predicted after each malt, with the higher calorie malt having the biggest reduction of ghrelin and, thus, the greater reduction in hunger and increase in satisfaction. 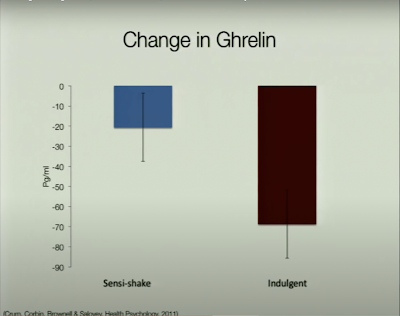 However, the interesting twist in the study is that the malts were exactly the same, a 300 calorie version … leading to the conclusion that the difference in the results could be attributed to the mindset about the satisfaction quality of the two malts. The “healthy malt” was expected to be less satisfying, more of a choice being made for health reasons than pleasure. The “decadent malt” was expected to be more of a treat, an indulgence.
The bottomline for me and this journey into Sweet Peace leads toward the idea that savoring food may be a key factor in the feelings of satisfaction. Changing my mindset about specific, healthy foods could result in higher levels of satisfaction, a lowering of ghrelin levels, and thus fewer feelings of hunger and cravings.
This will be my focus for the coming week.
Resources:
Huberman Lab podcast: Optimize your mindset Dr. Alia Crum
Power of the placebo effect - Harvard Health Studies
Posted by Joyce Wycoff at 8:38 AM