I spent two thoroughly enjoyable years in Mexico. I loved the beauty and diversity of the land, the kindness and generosity of the people, and being immersed in a different culture and history. When I suddenly knew that it was time to leave, I wasn’t sure quite why. I said, “family,” and that was true, but it wasn’t all of it. Walking gradually offered me some other clues.

Here in Reno, where the streets are flat, walking became, once again, a mental activity rather than a way to meet my basic needs, traversing the cobblestone streets which require constant attention to foot placement. The joy of following my feet wherever they wanted to take me freed my mind to wander and wonder.
This morning, while walking through the whitewater park along the river, I saw a man wobbling on a balance line strung between a pole and a tree. It wasn’t a familiar sight so I went over, iPhone in hand, and asked if I could take his picture. He said, “Sure” and I watched as he walked (wobbled) across the line, muscles taught, ukulele in his left hand waving through the air as his balance came and went. 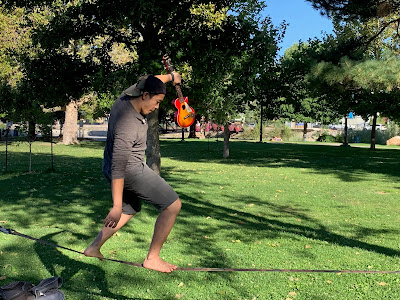 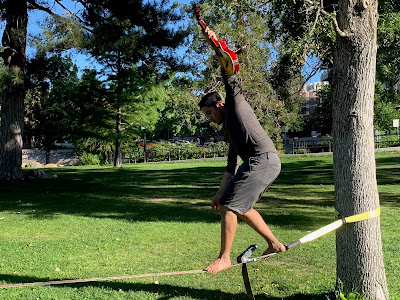 When he stopped and I asked him why he was doing this, he talked about balance. Then I asked him if he was trying to do something crazy (thinking about the dare devils who cross canyons) and he said, “Yes.” He obviously wasn’t ready to be more than the two feet off the ground, so I’m sure I looked shocked.  He said he wanted to be able to do back flips and play his ukulele while walking the line. I laughed and offered to send him a photo, and, with his email safely in my phone, walked on. 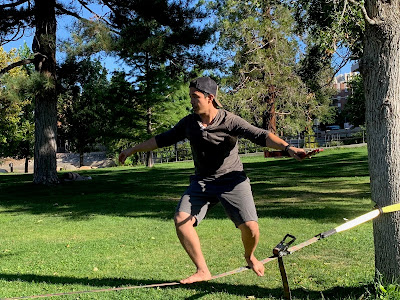 It wasn’t until I was sitting at a coffee shop, watching the river flow by, that it struck me: that was something I had missed in Mexico … those random, spontaneous conversations that add a sliver of understanding to my view of the world. In Mexico, my lack of language fluency precluded me from connecting with strangers or hearing bits of conversation as I walked through the world. I worked hard at learning the language and was making progress, but reality (and a friend) told me it would be another 3-5 years before I would be conversationally fluent.

Maybe if I were 40, I would have continued that journey. However, it wasn’t just the language. I was also missing enormous chunks of understanding of the culture, the history, and the governmental structure that affected every day life. I am a learner so I could have eventually filled in those blanks. However, learning takes time and effort and were those things my priority for my learning efforts?

Raffy, the man on the balance line, taught me how much I had yearned for those random connections with other lives, those lessons spelled out in actions rather than words. He had set his line up in a public park, willing to be seen learning something new, wobbling, flailing, wobbling again.  And, he had an outrageous goal to turn backflips and play the ukulele. Could he even turn back flips or play the ukulele on the ground?

It made me wonder where in my own life I was lacking the willingness to wobble in public ... and were my own goals outrageous enough?

On my journey home, I passed a small house, woman weeding her small garden, man on a porch swing apparently talking on the phone. My ears turned toward the conversation and the joy of eaves-dropping, something I also missed in Mexico. I heard … Marx … the principles of Utopia …

I laughed and walked on, happy to understand another bit of why I pulled up stakes once again.
Posted by Joyce Wycoff at 11:05 AM