What happened today: was it ants or the moon?

A friend on Facebook posted that the coming new moon will generate a lot of “positivity.” So, maybe it was new moon energy, but something unusual happened today.
First of all, I did something out of the ordinary for me: I approached a stranger and asked her a personal question. I hesitated twice, thinking that what I wanted to ask her might be imposing or even rude, but when she walked right by me on her way away from the coffee shop and the moment was slipping away, I finally stood and said, “Excuse me."

Let me back up. When I moved to high-desert Reno, I heard there was a “marina” here, so, eventually, I went looking for it. What I found was a beautiful park with a large pond and a great walk. There were a couple of small docks for non-motorized boats in front of a luxury apartment complex that apparently earned the area its title as a “marina.”

This tree-lined park buzzed with ground squirrels zipping past walkers and a few morning fishermen. Only a few years before, it had been a Toxic Superfund Site, a gravel pit that had been contaminated by a massive spill of a nearby fuel-tank farm. After the clean-up and the flood of 1997, it was discovered that it was a natural aquifer and maintaining its desired 100-feet deep level requires pumping out a million gallons of water daily into the Truckee River. 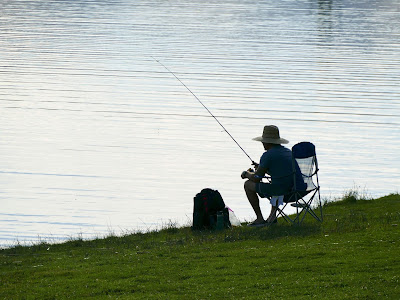 There is a charming coffee shop by the marina and I had resolved to spend some time there. Today my plans changed twice before I wound up there and settled in with an iced-latte and my notebook. I briefly noticed a woman across from me working on a Mac laptop, but I was focused on a new project.

The new project has been niggling around in my mind for quite some time. It calls to me, and at the same time it overwhelms me. It seems like a project someone else should do … someone with more credentials and experience. So, I’ve been in the “maybe stage.” Maybe I should do it. Maybe it would be fun, or even useful. Maybe it’s too big or too much work. Maybe I don’t know how to put it together. Maybe ... maybe ... maybe.

That’s where I was, sitting at an outside table making notes on all these maybes when I noticed the woman again. She looked interesting and like she might be in the right age range. The new project is about women in “this stage of life,”  what they're learning, how they're coping with the challenges of this stage, and how they find meaning and purpose. I thought briefly about introducing myself, but it was easier to just stay in my own head. 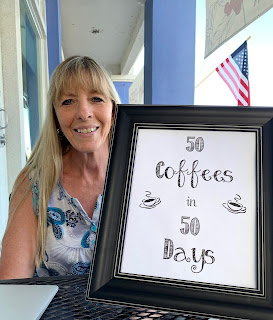 Then, she got up, gathered her stuff, and walked over to the trash can. She walked easily and gracefully, and it took a moment to notice that she had an amputated foot. That increased my interest; obviously, she had faced a challenge and could have wisdom to share. But, she might also resent an intrusion on her privacy. When she went inside, my mind was churning … should I approach her or would it be rude? I finally got up and went inside, determined to introduce myself; but she was talking to the counter person, so I went back outside and sat down. It wasn’t the right time.

A few minutes later, she came out and was walking right by me. I could sit and watch the moment evaporate or I could do something. I had an excuse, many excuses … I didn’t know her, I didn’t even know if she was old enough, or if she would be interested, or if she would think it rude of me to approach her because of a physical handicap.

Then, without further thought, I stood up and said, “Excuse me … I hope I’m not being rude, but I’m working on a research/book project and wondered if I could ask you a question?”

“She smiled and replied,
“That’s interesting, I’m working on a research project, too.”

We laughed and wound up sitting for another half hour talking about our projects. She interviewed me for hers and agreed to be part of mine. We shared some information and resources and decided to get together again.

During these minutes, I found myself tearing up as I felt touched by the Universe, gifted with encouragement and the sense that this new project had just left the “maybe stage.”

What about the ants?

Oh, yes ... the ants! I’ve recently begun to think change is the work of ants.

Think of any major moment in your life and try to find its start … getting married, having a baby, getting hired for your dream job, or even breaking up with your first love. You may remember when it happened, or even when you decided that it should happen, however, if you follow the trail back to the true beginning, to the first moment it became a possibility, it often starts with an ant. … Ant?

Imagine it’s a slow day and you’re watching an ant carry a crumb larger than itself back to its nest. Suddenly, you think: if that ant can do that, I can certainty do this thing I’ve been thinking about and wanting to do. That's the ants at work, shifting the ground beneath your belief systems.

There are other ants … the phone rings and your life shifts … you turn right when you normally turn left … someone hands you a book … or you stand up and ask a stranger a question. There are millions of ant moments in the world and you never know when they’ve changed your life until you look backwards, tracing the winding path back to the beginning and finding an ant hill of tiny shifts, decisions, and happenstance.
And, at the top of that tiny mountain, there’s this smirking ant holding a sign that says:

Author Ann Patchett calls them breadcrumbs rather than ants. In her 2006 commencement address at Sarah Lawrence, she said,


"Every choice leads you to a trail of breadcrumbs so that when you look behind you there appears to be a very clear path that points straight to the place where you now stand. But when you look ahead there isn’t a breadcrumb in sight, just a few shrubs, a few trees and woodland creatures … “

Call them breadcrumbs or ants, we almost never recognize them when they happen. Only in hindsight do we look backwards and say, “Wow! I wouldn’t be here, doing this today, if that tiny event hadn’t happened."

Somehow, I think the shift that happened today might just be the work of ants … but, of course, I won’t know until some day in the future when I look back and say, “Yes, that’s when it started.”
Of course, beginnings are just beginnings. Unless, I carry forward and follow the call of this project … unless I choose to do the work to make it something, when I look back, there will be nothing to see and I won't even think about all those tiny ants scurrying around trying to create a new path.

Today I stood up and took a minuscule risk. Tomorrow and for many days into the future, I will have to stand up again and take another risk. I will have to risk talking to strangers and making myself vulnerable. I think it might be slightly easier because I can remember today's magical moment when I felt the Universe write “YES!” across the sky. 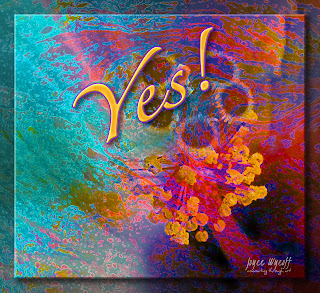 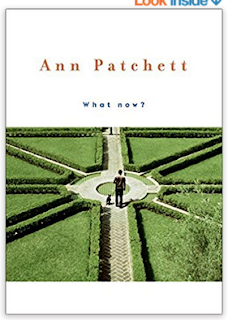 Ann Patchett gave the 2006 commencement speechfor Sarah Lawrence and it was so popular, she later converted into the short book What now?
Posted by Joyce Wycoff at 9:53 PM