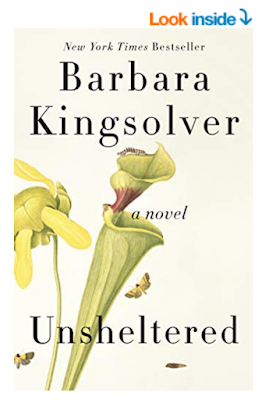 Normally, my reviews of anything Barbara Kingsolver writes are filled with superlatives. As I approached the end of this book, picked up by happenstance at the library, my only words were: brilliantly boring.

Boring isn’t exactly the right word … maybe normal? A perfect family … a perfectly imperfect family … with no happy ending in sight.
Kingsolver skillfully skips back and forth between two families more than a hundred years apart, sharing only a town and a falling down house between them, never depending on the novelist’s grab bag of dramatic arcs to manipulate the tension.
The metaphor of the lives of both families is a failing house deteriorating under the relentless assault of time with little hope of repair or renovation; a home that does not shelter and holds no hopes for the future.

Reading this book is like having coffee with a friend whose luck has been on a long-term downward slope: a train wreck in progress. It is an uneasy feeling, made worse by caring about your friend, but wishing you could just walk away or snap your finger for magic to appear.

Kingsolver is not a Hollywood writer.
You just know that no one is going to gallop in and save the day.
So how will it end?

The ending begins in the middle of page 400, in a cemetery where a mother-daughter sit talking in a way that made me want to run away as the truth unfolded and I saw myself as both mother-daughter and as human being in the current state of our world. The next fourteen pages are some of the most honest I’ve ever read.

It wouldn’t be fair to even give a glimpse of their content. I just hope you don’t miss them.

For more of a detailed description of the Amazon Best Book of October, 2018:  In her insightful and politically charged new novel, Barbara Kingsolver finds deep resonances between the Victorian era’s attitudes towards science, and our own. Unsheltered begins on the eve of the 2016 presidential election, when Willa, a freelance journalist whose family has fallen on hard times, discovers that the house they’ve moved into has a “nonexistent foundation.” Hoping to enlist restoration help from a historical society, Willa traces the origins of the house to Thatcher Greenwood, a science teacher who lived there in the 1870s, and his neighbor, a real-life woman biologist named Mary Treat, whose research supported Charles Darwin’s theory of the origin of species. Just as Darwin’s theory challenged the Victorian belief in the Judeo-Christian creation myth, so too, in Willa’s era, does global warming challenge prevailing myths about the future of civilization. Kingsolver, whose 1998 novel The Poisonwood Bible was a finalist for the Pulitzer Prize, carries off this cleverly structured dual narrative with aplomb and with a certain degree of rage at charismatic politicians, both past and present, whose disregard for science puts humanity in peril. –Sarah Harrison Smith, Amazon Book Review
Posted by Joyce Wycoff at 1:24 PM