What a journey this is. All I wanted to do was play with an abstract. I was watching a video from David duChemin’s photography course* when I decided to play with a 16:9 orientation and some diagonal lines see what kind of abstract I could create.

The first image is where it began. I thought, “ah, a landscape,” and considered stopping. 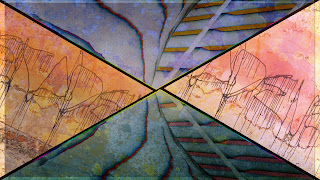 But those clean spaces called to me so I added texture to each. and wound up here. This was getting interesting and I thought I might be ready to stop. But, those lines seemed to want to point at something.

So, first I played with a photo of my keys that I had just tossed on the table while still in California. I’ve always been intrigued by the photo and thought maybe they would make an interesting central object. A couple of hours of playing proved that theory wrong.

Flipping through dozens of choices resulted in nothing until I came to this tree now flooded by Lake Chapala.
When I dropped this image onto the abstract, something happened and several hours later, “The Last Tree” emerged and finally said, “Okay, I’m done."
This convoluted, unexpected, delightful journey of art continues to delight me.
*David duChemin has a bunch of very good YouTube videos available for free.