This isn’t what I want to do today.

It isn’t that Day 2 wasn’t useful. It was and I had a great day diving into typography with the videos in Module 3. I made four versions of a quote that was part of the day, and each one got better … I think. I’ll put them below for you to judge.

But, yesterday evening handed me a blow. My beloved toy poodle of ten years, Missy, was hit by a car and killed. It was sudden and shocking and part of me just wants to go to bed and not get up. I’ve only been here in Mexico for two and a half months, but, fortunately, very good friends who have become family are also here. But, without Missy, I feel alone and abandoned. She was a brilliant companion, easy going, smart, and  loved hugging people.
Ten years ago, shortly after my husband died, and a few months before Missy arrived, I stumbled into a digital collage class in Puerto Vallarta. It required Photoshop which I didn’t own. But, I bought it and headed out expecting to be the dunce of the class. When I arrived, I was the only person in the class and had a solid week of one-on-one Photoshop tutoring and collage making.

When I returned to my empty house, I made art and it changed my life, helped heal my heart. Now I have a choice of whether to honor the commitment I made to finish this 21-day program or let it go and wait until I feel better and stronger to try again.

I don’t particularly think that things happen for a reason, but I do believe that we can find meaning in everything that happens to us. Until yesterday, the AWAKE program and this 21-day course were “add ons.” Life was good, comfortable and it would be nice to take the next step in my art. Now, it already tugs at me like a life-line, something that will help me deal with this loss.

If I decide to postpone this course, what would I do instead? What else could I lose myself in that would help me deal with the pain? No answer comes.
One can only spend so much time feeling broken. Posting this is my decision to go forward. I am already feeling the beginnings of connection to the AWAKE group. Their work inspires me and it feels like I have found my artistic tribe. I know that making art is what I need to do, my way of dealing with my world, inner and outer.

A friend of mine tells me Missy is now an angel watching over me. So, if I wind up making pictures of dogs with angel wings, you will know why. Be kind.

So, in the meantime, here is the quote I worked and reworked as I watched the videos on typography. Tomorrow maybe I’ll actually deal with the content of clearing the decks.
Version 2: A quote from Rick Poyner changed the way I think about quotes and text on a page, so I tried to emphasize the important parts of the message:

"The aim here is to promote multiple rather than fixed readings, to provoke the reader into becoming an active participant in the construction of the message."

More thoughts from the video and a breaking away from the old maxim that you could only use 2 or 3 fonts on a page led to this version: 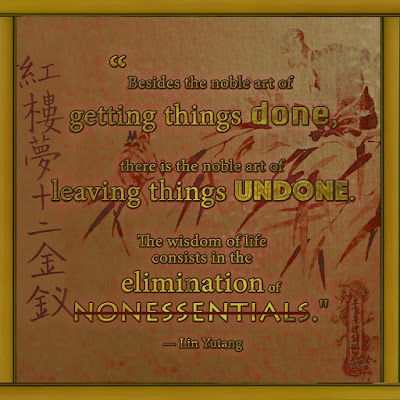 Version 4: More techniques and playing and I arrived here. Will it be the last? Who knows? 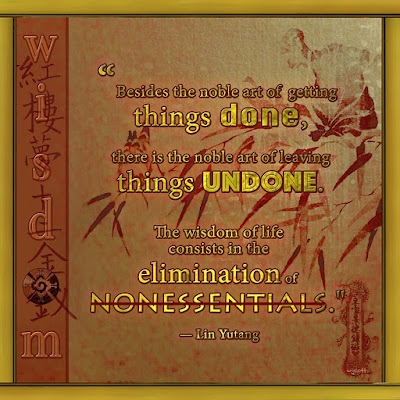 By the way, I like knowing the person behind quotes, so here's what I found from Wikipedia:

Lin Yutang ( October 10, 1895 – March 26, 1976) was a Chinese mystic, writer, translator, linguist and inventor. His informal but polished style in both Chinese and English made him one of the most influential writers of his generation, and his compilations and translations of classic Chinese texts into English were bestsellers in the West.