This week I met a young woman who told me a story ... a sad story that happens all too often.

Her dad died when he was only 52, leaving his wife and five grown and almost grown children.  Her mom had been a talented creative giver ... one of those women who could make anything and was constantly giving it all away.  When her husband died, it took the spirit out of her and she stopped.  For almost twenty years now she has withered, losing precious time with her children and grandchildren, losing her health ... losing her self.

Grief can do that; it is a powerful force that drains our life energy.  When a loved one dies, it's like a door closes on the life that was.  Sometimes we sit in a chair facing that doorway, wishing it would open again, yearning for what was.  However, behind us, if we could only turn around, are new doorways opening  to new lives and new joy.  Sometimes a sense of guilt keeps us glued to that chair faced toward the lost past.  We are afraid of dishonoring the dead by turning toward a new life.  In some cultures, the wife is expected to throw herself on the funeral pyre.  We don't do that literally but sometimes people do it slowly, metaphorically, letting their life energy fade away like embers in an untended fire. 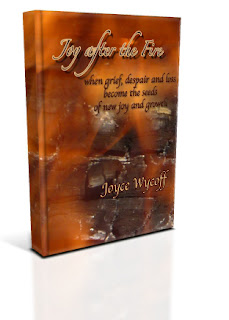 After my husband died, I read countless stories of tragedy and grief, and it seemed like everywhere I looked, there was one common thread leading toward new joy:  creativity.  People who were able to go forward and build new lives found a creative outlet:  for some it was creating a living memorial for their lost loved one such as  Candy LIghtner who started Mothers Against Drunk Drivers (MADD) after her daughter was killed by a repeated drunk driver or Cindy Sheehan who began to protest war after her son was killed in Iraq.  For others it was finding or renewing a passion for gardening, sewing, family, community, or art.

Creating something new plugs us back into life, starts the juices flowing again ... heals us. I was one of the lucky ones.  A few weeks after my husband died, in an effort to escape the pain, I wound up in a digital collage workshop in a tiny fishing village just south of Puerto Vallarta.  That workshop changed my life ... and maybe saved it.  I recently published a book about death, art and the healing power of creativity in hopes that it might help others.


Joy after the Fire, when grief, despair and loss become the seeds of new joy and growth is available from iBookstore for iPads or as a downloadable pdf that you can read on any computer ... just click the Buy Now button.  Grief and loss comes to each of us ... finding a way to create something new seems to be the only real way to heal the wound.