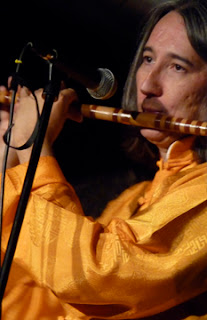 Sometimes live music spontaneously combusts into magic.  That happened last night at the final concert of the Yosemite Flute Festival.  Something about the venue, the audience, and the night enchanted the musicians and they left the realm of performance and entered the world of playful collaboration.  On the small, intimate stage at the Sierra Sky Ranch, the three main performers danced in and out of each others acts, generously called up other musicians to join the growing tapestry of music, and wove the audience into the musical energy.

For those of us whose only job was to receive and appreciate the music, it was an overabundant feast.  Technically, there were three acts:  Rona Yellow Robe, a beautiful musician and songwriter whose voice, flute and lyrics were simply mesmerizing; Rafael Bejarano, a real-life energizer bunny who blows the blessings and stories of the ancestors through his didgeridoos; and Ron Korb, a flute shaman who took us on a whirlwind tour of world flutes.  However, the acts began to morph and mingle as Joe Young, Rick Dunlap, and Randy Granger supported, inspired and riffed with the headliners.

The final number burst into musical chaos as all of the performers spontaneously joined Ron Korb on stage for a number that had the audience clapping, dancing and adding their voices and energy to the mix.  The stars shone brightly last night and gifted all of us there with a unique and memorable experience.

The Yosemite Flute Festival is the brainchild and labor of love of Rick Dunlap and Linda Angel.  The festival supports and is generously supported by the Positive Living Center.  All of them deserve another round of applause.

Here are some YouTube samples of other performances by the headliners: