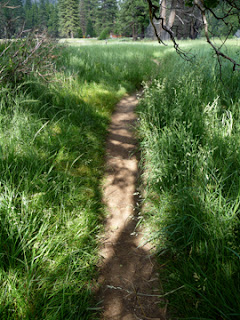 I spent the weekend in a rabbit hole.  It wasn't Alice's rabbit hole but there might have been a tunnel that would have connected us ... if I had looked.  But, I had a return ticket in my pocket which I held tightly, closed my eyes and repeated the mantra of "home" hoping it would keep me safe.

It was only as I was leaving the gravitational pull of the rabbit hole that I began to realize that I had missed an opportunity to explore a new land.  In my rearview mirror, I saw a a sign shrinking with each mile ... "Winnie ... come find me ... Tigger."  It was too late to turn around.  My homeward bound ticket held me in it's single-minded thrall.  But, something deep within me whispered that I had left a door unopened, a flow of creativity and connection unfelt.
Suddenly I knew that I could have opened my eyes, opened my heart, opened my mind to the strange world around me.  I would have still been safe and I might have carried home a new treasure.  "Two roads diverged in a yellow wood ..." and I took the straight one home and will never know what difference it made.  Next time maybe I will choose differently.
Posted by Joyce Wycoff at 9:06 AM