The Fog of Fear 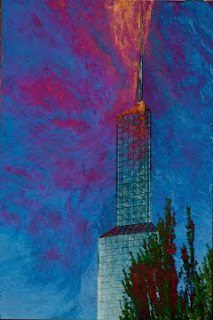 This morning my blog sister Louise (Recover Your Joy) took me to a new place with a quote and story about Florence Chadwick ...


"Look, I'm not excusing myself, but if I could have seen land I might have made it."
-- Florence Chadwick, explaining why she gave up her goal of being the first woman to swim from Catalina to the coast of California one-half mile from her objective.  July, 1952.  Two months later she achieved her goal in the same icy waters with the same fog that obscured the coast but with the understanding that land was there, it was just her fear that was obscuring it.

If I could have seen land ...  If I only knew that where I'm trying to go was within my reach, I could keep going.  But, isn't that always the case when we're trying something new or stretching into something where we can't see the end?  Fear is always the fog between us and our objective. Life is about continuing on through that fog.  Doing what we know we need to do, depending on the muffled voices telling us to keep on, that we're doing fine, somehow holding the picture of the distant shore in our mind and just keeping on.

When the fog of fear fills me, I think back to Dory in Nemo who repeats over and over ... "Just keep swimming.  Just keep swimming."  But swimming is clear, a physical activity ... you know when you're doing it.  It's in the murky depth of relationships and our spiritual development where we often lose our bearings.  What do we just keep doing?  What is the shore we've lost sight of?  Are we headed in the right direction or swimming south toward San Diego instead of directly toward Los Angeles?  The fog of fear creeps in on these uncertainties and we have to shake our heads and ask, once again, once again, Who am I?  What do I stand for?  Where am I headed? What should I be doing?

I am lost in the fog about a family situation where one person is hurting other people I care about.  I have a small piece of leverage that I can use to ... possibly ... make him do the right thing.  It would create great anger if I should choose to exercise that leverage ... and most likely would not create the desired end.  My thoughts, though, are filled with the heroic effort and the triumphant results and, admittedly, some satisfaction at having a bit of power in a relationship where I have always been powerless.  But what is the shore I've lost sight of?

I always want love to be my shore so I ask myself:  what is the loving thing to do?  Unfortunately, the answer is muddled and mixed.  Loving to whom?  Him or the people he's hurting?  I can feel the fog creeping in obscuring the shore.  I want to ask someone to pull me out of the icy water and wrap me in a warm towel.  If I could only see land ...


Over the years, I've used a set of Rumi cards as a source of wisdom and have been amazed by their guidance.  So rather than end this post with the previous paragraph as I was tempted to, I drew a warning card and received the following advice ... a "warning" card:


Support patiently the disagreements inflicted by ignorant men.
Fight against fools and you make the matters worse:  Keep calm.

Stay calm ... that I can do.  And, a weight rolls away as I realize that it's not my job to make someone else live up to his better nature.  My job is just to live up to mine.
Posted by Joyce Wycoff at 9:53 AM