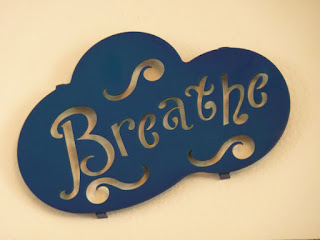 I used to bemoan the fact that God couldn't just write across the sky whatever she wanted me to do ... why did everything have to be so cryptic and confusing? Then I heard someone say that God speaks through other people so I started listening in a slightly different way. Today I heard someone telling his story and he talked about his need to surrender ... to quit trying to make things happen. They say when things come in threes you should *really* listen and this was the third time recently that I'd heard the variation on this theme ... relax, be ok with not knowing, surrender.

But, I don't want to surrender, relax or not know. I want wrestle this bear to the ground and sit on top of it till it gives me the answer I want. I want to throw a temper tantrum in the middle of the store, holding my breath till I turn blue or until God says, "It's ok, honey, here's your lollipop." I want to make a color-filled Gantt chart with all the little boxes neatly filled in and showing me who's going to do what and when. I want to flip to the back of the book where it says, "God's in his heaven, all's right with the world." Don't even begin to tell me it's about the journey not the destination ... I've been saying that to myself and other people for a hundred years. I don't want to hear it again. I know it's right; I just don't want to hear it or any of the other cliches about "This, too, shall pass."

And, it's not that I'm sad or unhappy. It's not even that I'm particularly anxious for anything to change ... I'm doing what I want when I want. I have more freedom, time, health and resources than lots of people. I can do almost anything I want, go almost anywhere I want. So, what's the problem, child? Good question. Maybe it's the surrender thing. Surrender means releasing control and I don't want to give up control. I want to be in charge of my life, setting my own course, charting my own destiny. I want to know where I'm going to be next month, next year, in ten years.

Well, guess what, sweetheart, you don't, you won't, you can't. Period. End of statement. There are no guarantees and no previews of coming attractions. You gets what you get. And it's up to you to do with it what brings you joy. Today ... not tomorrow ... today. You are not in control of what comes your way ... you're only in control of what you do with it.

Hmmmm. But, look around you ... you're in one of the most photogenic places in the world. You're safe and warm and you've got everything you need. Why don't you just relax, quit trying to make things happen and surrender. Why don't you just trust that the Universe will bring you what you need?

That's your choice ... you can rant and rave and rail at the gods ... but wouldn't it be easier to accept whatever it is and learn from the lessons it offers?