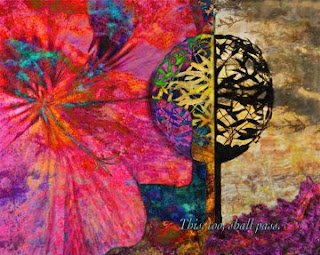 In Asheville, I started a new series of paintings based on life messages. This is Life Message I and it was given to me early in my career when I asked a co-worker about the symbols on his ring. He told me they were Hebrew for "This, too, shall pass." The story, according to Wikipedia, goes that Solomon wanted to humble his trusted minister so he sent him off to find a special ring, stating, "It has magic powers. If a happy man looks at it, he becomes sad, and if a sad man looks at it, he becomes happy." Solomon knew that no such ring existed in the world, but he wished to give his minister a little taste of humility. Six months later the minister returned with a small gold ring and on it was this inscription. At that moment Solomon realized that all his wisdom and fabulous wealth and tremendous power were but fleeting things, for one day he would be nothing but dust.

The phrase "This too shall pass" and the associated ring story were made popular by Abraham Lincoln in his 'Address Before the Wisconsin State Agricultural Society, Milwaukee, Wisconsin' on September 30, 1859:

It is said an Eastern monarch once charged his wise men to invent him a sentence, to be ever in view, and which should be true and appropriate in all times and situations. They presented him the words: "And this, too, shall pass away." How much it expresses! How chastening in the hour of pride! How consoling in the depths of affliction!

Nothing is constant except change which must mean that our best strategy is gratitude for the moment and flexibility for what is headed our way.
Posted by Joyce Wycoff at 5:35 PM