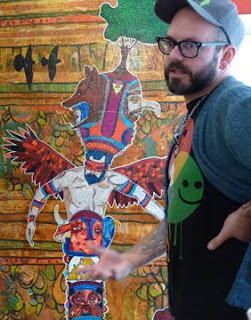 This is Gabriel Shaffer, an "outsider" artist from Asheville, NC. We visited Gabriel in his home studio and he graciously showed us his work and told us about his process for creating and marketing his art. The current economy has been hard on artists but Gabriel is thriving financially and creatively. He made a remarkable statement as we talked with him:

"I don't worry about selling these pieces because I know they already know where they need to go. They're just waiting for their owners to pick them up."

What if we all had that much confidence in the Universe? What if we knew that our creative efforts were needed and that we were just responsible for creating them for the "owners" who were just waiting to pick them up? It's a very interesting thought.

The term outsider art was coined by art critic Roger Cardinal in 1972 as an English synonym for art brut (French: [aʁ bʁyt], "raw art" or "rough art"), a label created by French artist Jean Dubuffet to describe art created outside the boundaries of official culture; Dubuffet focused particularly on art by insane-asylum inmates.[1]

While Dubuffet's term is quite specific, the English term "outsider art" is often applied more broadly, to include certain self-taught or Naïve art makers who were never institutionalized. Typically, those labeled as outsider artists have little or no contact with the mainstream art world or art institutions. In many cases, their work is discovered only after their deaths. Often, outsider art illustrates extreme mental states, unconventional ideas, or elaborate fantasy worlds.

Outsider art has emerged as a successful art marketing category (an annual Outsider Art Fair has taken place in New York since 1992). The term is sometimes misapplied as a catch-all marketing label for art created by people outside the mainstream "art world," regardless of their circumstances or the content of their work.

In 1991, the first and only such organization dedicated to the study, exhibition and promotion of outsider art was formed in Chicago: Intuit: The Center for Intuitive and Outsider Art. Chicago is often recognized for its concentration of self taught and outsider artists, among them -- Henry Darger, Joseph Yoakum, Lee Godie, William Dawson, David Philpot, and Wesley Willis. Intuit maintains a non-profit museum, open to the public, which features exhibitions of art by intuitive, outsider, and self taught artists.