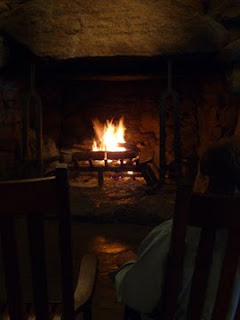 I am in Asheville, NC, partially for an art workshop and partially as a pilgrimage to my youth. Not that I've ever lived here before but part of me is staked to this ground, permanently embedded in this strange land by the writings of Thomas Wolfe, whom I fell in love with when I was 16. Wolfe himself said, "You can't go home again," but today I visited his boyhood home which he described in Look Homeward, Angel as “the bleak horror of Dixieland ... mean, cramped huddle of brick ... painted a dirty yellow." As I passed through the rooms which are meticulously restored to reflect Wolfe's time there, I wondered why this giant of a man with his avalanche of words and anguish had so captured my youthful spirit.

Perhaps my favorite passage from Look Homeward Angel was ...

And, later I read this quote from him:

“The whole conviction of my life now rests upon the belief that loneliness, far from being a rare and curious phenomenon, peculiar to myself and to a few other solitary men, is the central and inevitable fact of human existence.”

Perhaps I recognized the loneliness of a fellow traveler even before I recognized loneliness as a theme in my life. There is no doubt I was a lonely child but I was also a quiet child lost in the silent world of books ... an unlistened to child whose words and feelings were locked away behind a cheerful demeanor. Maybe Wolfe's freedom to spew words and feelings across the page spoke to my yearnings to do the same. I don't know why he had such an impact on my youth and I don't know why walking through his museum and re-reading the story of his brief life (he died two weeks before his 38th birthday) and his continued struggles with time and loneliness still brings me to tears.

Wolfe's explanation for saying "You can't go home again," was that it doesn't exist except in the murky depths of our memories. Today stirred up those memories and for a little while I did go back to that time when his writings awakened the awareness of my own loneliness and wordlessness. He made me yearn to be a writer and to hear my own voice.

If we are, indeed, the sum of all of our experiences, part of who I am today is because of Thomas Wolfe. And, I wonder, had he lived longer, if he would have found solace from his loneliness. I know that spending time with his words and with my own past made me feel more connected to my own spirit and less lonely.
Posted by Joyce Wycoff at 5:10 PM